XPD, Australia’s iconic World Series expedition adventure race, took place in North Queensland last week with 31 teams trekking, biking and paddling non-stop for up to 6 days on a 472km course, starting and finishing in the beach resort of Palm Cove.

The 11th edition of the race was one of the most challenging in its 17 year history, both for the teams and the organisers.  With international entries missing due to travel restrictions, state lockdowns before the race threatened to reduce the entry to just a few teams.  Australian adventure racing’s strong community spirit and never-give-in attitude ensured that didn’t happen, and on an emotional registration day the majority of the teams made it to the race.

Many travelled to the race early, teams were reorganised, and last minute replacements called in for those who couldn’t travel.  Quite a few racers stepped up when asked, “Can you do a 6 day expedition race in a few days time?”  Teams had waited, trained and planned for the race for 3 years and when 31 teams gathered on Palm Cove’s famous beach for the Sunday morning start, it showed just how much the race meant to them.

Unusually, the course began with the teams of 4 splitting into pairs.  One pair kayaked along the coast in windy conditions, which saw a few capsizes, while their teammates ran along the beaches and cliffs of the coastline to rejoin them at Wangetti.  In what must be the most unlucky start ever, the two runners from ‘Happy Wanderers’ didn’t get to rejoin their team mates thanks to a dog bite which required stitches, and a fall resulting in a dislocated shoulder. The unfortunate team was out right at the start of the race!

Following a run to a waterfall up Hartley’s Creek, where Team Alpine Avengers spotted a crocodile, it was time for teams to get on their bikes for a 44km ride inland and by the first night of the race the leading teams were on the 35km trek around Mount Elephant. This included an abseil in a stunning location, with teams descending a sheer cliff into a circular water hole, which they then swam across.

Next came a long paddle down the Mitchell River, which was one of the highlights of the race.  Angus Rodwell of Team ‘Resicon – Thought Sports’ said, “It was an unbelievable paddle and we were seeing fresh water crocodiles on the banks sunning themselves, and wild pigs swimming the river in front of us.”

It was also a difficult stage for the team, who had been leading. “We’d not taken the waterproof maps and ours turned to paper mâché,” Rodwell explained.  “We thought we’d missed a checkpoint and went back upstream for an hour before our friends in Alpine Avengers arrived and let us see their maps. We hadn’t missed it and turned round and paddled back down again!”

Team Chipesti, who were in their first expedition race, were now in front of all the established elite teams in Australian adventure racing.  Their position was a surprise to all but their local supporters in Queensland, who knew they were top class endurance racers and had prepared intensively for this race on home territory.  They were first to start the following ‘Gold Rush’ stage, which combined cycling and trekking with some difficult navigation, and at the end of which teams panned for Gold.

The race was named ‘Rivers of Gold’ as teams were following in the footsteps of the gold rush explorers of the past, and teams collected a bag of river dirt on the route, which they panned at the end of the stage.  Each bag had some gold in it for them to find, so they all got to strike gold and take home a unique race souvenir!

For many teams the Gold Rush stage was pivotal as they struggled to find the checkpoints and had reached a point mid-race where they had to drop checkpoints. Some took so long finding the checkpoints they would end up taking the short course later in the race.

‘Resicon-Thought Sports’ regained the lead here, with navigator Rob Preston saying, “We pushed hard to get to most of the checkpoints in daylight as the navigation could be difficult.”  His team extended their lead on the next 86km ride on dirt roads past Mount Mulligan, and then “put the hammer down” on the 60km trek which followed, taking teams over the Hann Tableland.

With a big lead they now aimed to complete the paddle on the Barron river stage before nightfall on day 3, otherwise the team would have to stop overnight.  “We’d done well to push through,” said Rodwell, “and despite only stopping for 30 minutes sleep after the trek we functioned pretty well on the following ride, which had 20 to 30km of technical track.  When we got on the river it was amazing, with beautiful rapids, an overhanging forest canopy and orchids along the bank. We capsized and broke a paddle so Kathryn (Preston) was paddling one armed like a machine, as we raced to beat the dark zone and get off the river.” 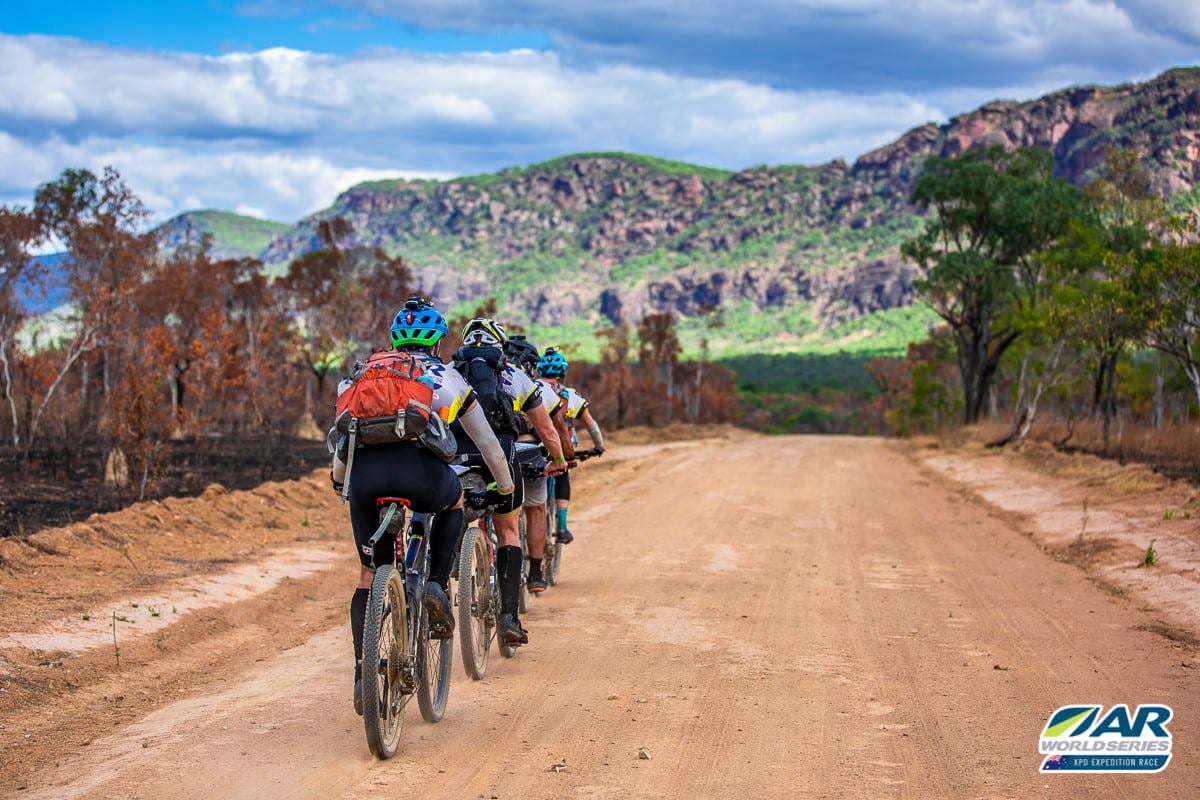 The team reached the end of the paddle with just 12 minutes to spare, and now had a huge lead and only a 17km trek remaining.  They crossed the line in a time of 84 hours 12 minutes to win by over 16 hours and for Rodwell it was a first XPD win.  His construction company, Resicon, sponsored the team after he and Tim Boote put the squad together and he said, “Crossing the line was exhilarating and I thought back to past races when I’d looked at the winners and thought they were untouchable, but when you build the right team and really work together anything is possible. It’s been a dream race.”

He added, “Watching the rest of the race I was in awe of the teams who kept going for another two or three days, persisting and dealing with all sorts of problems. I was so impressed and thought ‘how do they keep going for so long’?”

Behind the winners there was a dramatic race for the podium with team Thunderbolt coming through to take second by just 3 minutes (after over 100 hours of racing) from Alpine Avengers. Team Rogue placed 4th and Chipesti were 5th with time penalties keeping them off the podium. Rob Preston said, “It’s good to see a new team shaking things up and their navigation and speed was impressive, so I hope they’ll do more big races.”

Every team that subsequently crossed the line had their own race stories and had formed a tight bond through the highs and lows of a shared race experience where they depended entirely on each other. Kim Beckinsale of the leading female team, Mountain Designs Wild Women, said, “I want to thank my amazing teammates, who are all mums, and who have all been fantastic. They towed me for 90km when my bike was broken and are the strongest, toughest ladies on earth!”

The final team to finish were “Six Degrees of Separation” who crossed the line just before the course closed in a time of 144 hours and 27 minutes, to bring to a close an unforgettable XPD – Rivers of Gold.

XPD Rivers of Gold was round 6 of 2021 Adventure Racing World Series and part of the ARWS Oceania regional series.   The next ARWS race is Huairasinchi in Ecuador (Aug 20-26th) and the World Championships are in Spain in October.  The next Oceania race is the Hells Bells Adventure Race in SE Queensland (Aug 7/8th).

To find out more about the Adventure Racing World Series visits www.arworldseries.com

To find out more about XPD visit www.geocentric.com.au