The Podium Places Are Decided 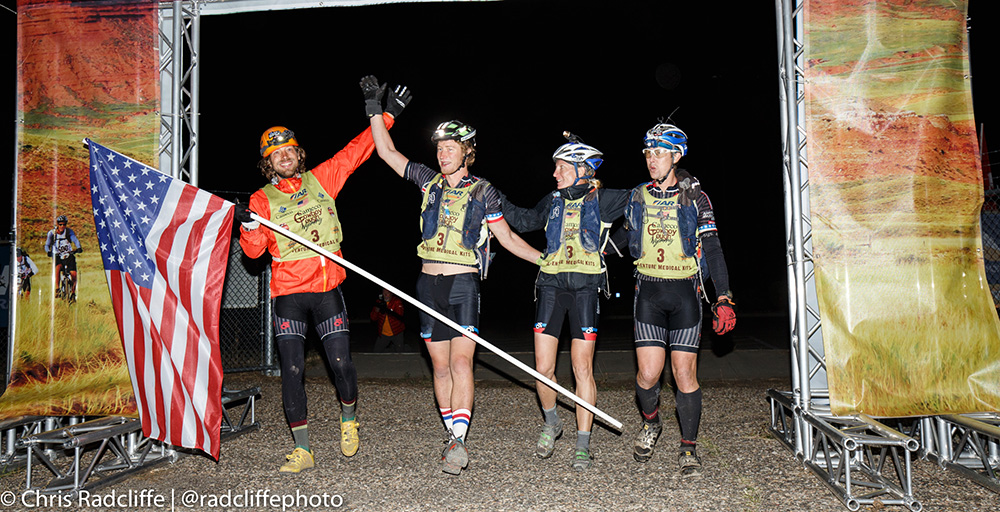 Behind Seagate several teams have been battling for a podium position and it’s been impossible to guess who might come out on top as positions kept changing. Teams would make mistakes, lose places and recover as others made their own mistakes. And the final night of the race has been no exception!

For a short while team Lozere Sport Nature moved into second, then they had to pull out of the race altogether, having pushed too hard too long.  Starting the final bike ride over Casper Mountain it looked as though once again it would be a race between the two Swedish teams, Haglofs Silva and Swedish Armed Forces … then both of them missed a turn and for a while were headed 180 degrees in the wrong direction!

Haglofs Silva turned around quickest and set off to ride up the mountain, but the mistake had allowed Team Adventure Medical Kits to close on them and pass SAFAT.  Now the US and Swedish teams were very close, but in the end it was Haglofs Silva who got back down to Casper first and took second place.

They were delighted and relieved to have hung on, knowing others were close behind them. “I’m surprised,” said Bjorn Rydvall. “We had such a bad night last night, losing so much time and we’ve had to push on really hard and not had enough sleep today.  We were slow in the canyon, maybe being a bit too cautious with boats.”

Responding to a comment that the team spent some time on the summit Aaron Prince said, “The control description just said Casper Mountain. It’s a big mountain!”

Robert Lindberg was more practical. “Is there any food here,” was his finish line comment.

The result is a remarkable return to World Championship racing for Rydvall after his diagnosis with diabetes. “If you’d asked me a year ago I’d have said I would never do a World Championships again,” he said. “Then I stepped in to race in China at short notice and after discussions with the team and at home it was decided I could race, but that was only a couple of months ago.”

I asked how he managed while racing and he explained, “It’s impossible to keep my blood sugar lever stable in an adventure race but I managed all except for the very start of the race where I came off the long bus ride in poor condition. I carry a lot more food now as I have food which is high in sugar and food which is low in sugar, and when I need to eat I have to check my levels first to decide which to have.”

There is a lot to cope with in an expedition adventure race, and many racers fail to keep their energy levels , food and hydration right, so to cope with those extra demands and finish in second place makes Rydvall’s return to the world championships even more impressive.

It wasn’t long before Team Adventure Medical Kits came into the finish (Haglofs Silva had to move out of the way), and the team were jubilant when told they were 3rd.  Olof Hedberg in particular was jumping around and shouting in excitement as it’s his first World Championship race. He was a very late replacement for Kyle Peter so to find himself 3rd in the World Champs was a dream come true.

Erik Sanders said, “It has been such a crazy race. We’ve been fighting since the beginning and if you made even a small mistake or slept for a while you lost places. Positions have been changing all the time, just crazy.”

Fourth across the line were Swedish Armed Forces who were naturally disappointed having raced in second or third place for almost the whole race.  “We missed the turn up the mountain,” said Emil Dahlqvist.”  I raced here last year and remembered it was well signed, but there was no sign and so we missed it. We are disappointed, but that’s racing!”

Shortly after Naturex finished in 5th place, the first of the French teams to finish once again, after battling with their compatriots FMR and Lozere Sport Nature much of the way.