There is never a checkpoint #12 in the PC12 Adventure Race in Colombia, because they say it’s the ‘Checkpoint of your dreams’.  The race times are all set to 12 minutes after the hour, so this year the race began from Rionegro at 05.12, and to make up for the missing out on a PC12, there is always a transition area where teams have all the foods they might dream of available.

It’s all part of the unique race experience in Colombia, which 18 teams were lucky enough to enjoy this year.  For the organisers this was their first Adventure Racing World Series Race, after staging a demonstration race last year.  It is something they have worked towards for many years, and despite many difficulties put in their way, it was a dream they would not give up on.

Covid meant the many international teams which had entered could not travel, and forced the race to be put back by a month when the hospitals were close to capacity and safety cover could not be ensured.  This put the race into the rainy season, and then a series of national strikes disrupted the country just before the race, though fortunately these were not too bad in the province of Antioquia, where the race takes place. 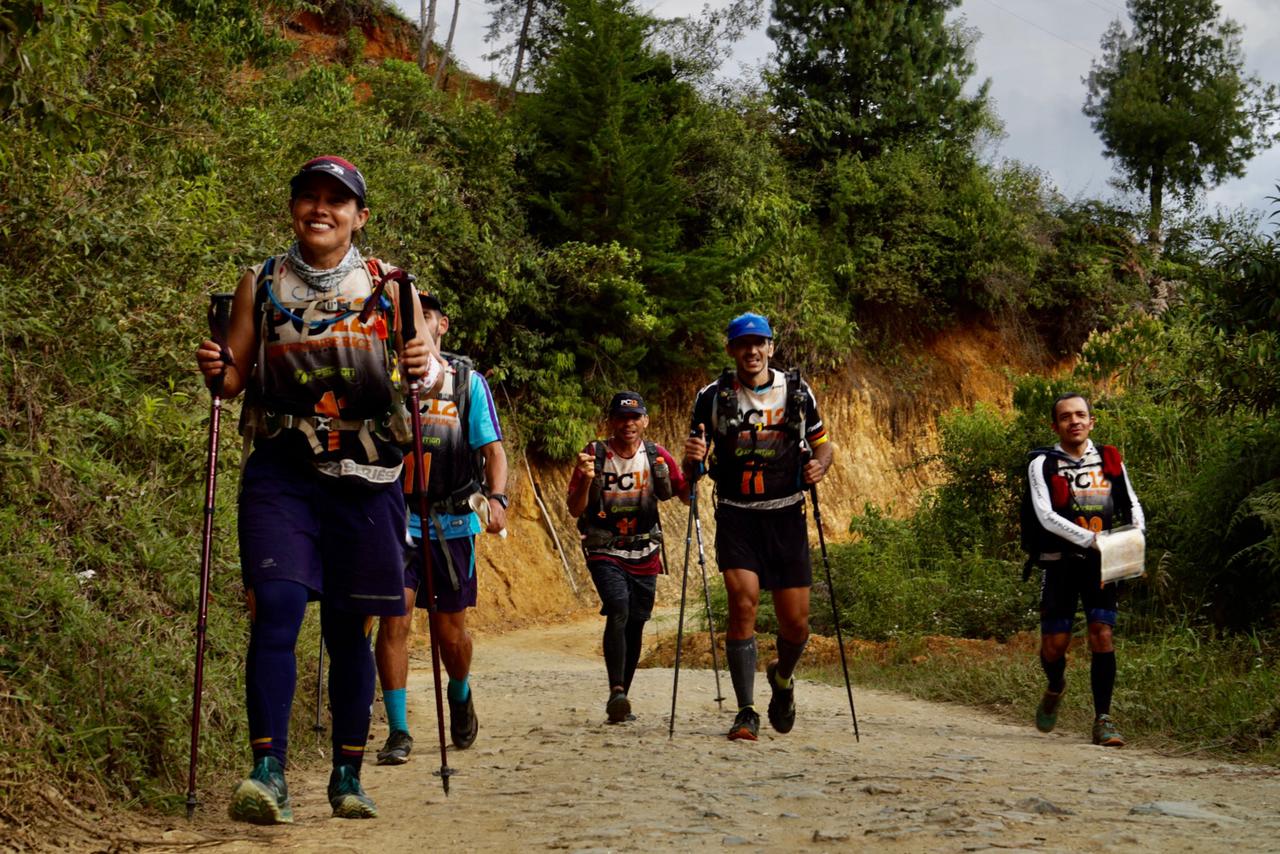 Despite all this the race went ahead with a few international participants from Costa Rica, Ecuador and Estonia, and with the wholehearted support of all of the established Colombian adventure racing teams. And what a race it was!

The course was themed as ‘La Ruta del Arriero’, or ‘The Route of the Muleteers’ and followed the traditional mule trails along which goods move between the mountain villages. The trails were a part of the navigational challenge of the course, and the warm and friendly welcome in the villages was an essential part of the Colombian race experience.

It was a tough course, and by the finish only 3 teams had completed the full ARWS route.  There was a massive 16,500m of climbing over the steep, jungle and forest covered hills, and some challenging checkpoints, including one in an underground river, a fast kayak stage, a 150m rappel and a via ferrata.  The temperatures were close to 35C at times and it was humid with frequent rains.  Race organiser Ricky Velez had promised, “the hardest ever race we have held in Colombia”, and that was delivered.

Almost from the start Team Bosi were dominant, which was no surprise as they are acknowledged as the strongest in the country.  Sponsored by a shoe and clothing brand in South America, they have been established for many years and their smart team work reflects this experience.  They had two navigators, one being the newest and youngest member of the team, Juan Daniel Sanchex Uribe, and took the win in 89 hours 18 minutes.

Their success gets them a place in the World Championships in Spain in October and it will be interesting to see how they perform as they have no international racing experience outside of South America.  They finished well ahead of the second placed Safetti team (96.54) and Saferbo Seti Papacara were third in 118.08.

Gabriel Montero of that team commented; “In Ecuador we treat tourists very well, but here in Colombia you feel like you are at home!“

The Costa Rican view from Osvaldo Chaves of Team Pura Vida was; “I think we left no mountain unclimbed! The whole race was amazing, with beautiful places, views and people, and the 150m rappel had the most wonderful exposure and views.”

For the opinion of a visitor from outside of South America Arthur Raichmann gave an Estonian view starting by saying, “I didn’t know there were so many different greens!”

Arthur, who has been an ARWS referee in the past, continued, “On the kayak section it was rough, and the water was unexpectedly high, so on one of the many falls my paddle was ripped away. I had to replace it with a bamboo inserted into a paddle bag.

“In the mountains interpreting the mule trails became more and more important as they disappeared, changed and took new directions. The map could only represent some of these trails and the navigation was challenging and definitely needed an open-minded approach! It was the same for everyone and we didn’t always get it right. We were riding on those trails as well as trekking, and that wasn’t easy, but I’d say the vegetation is quite friendly for an equatorial country. 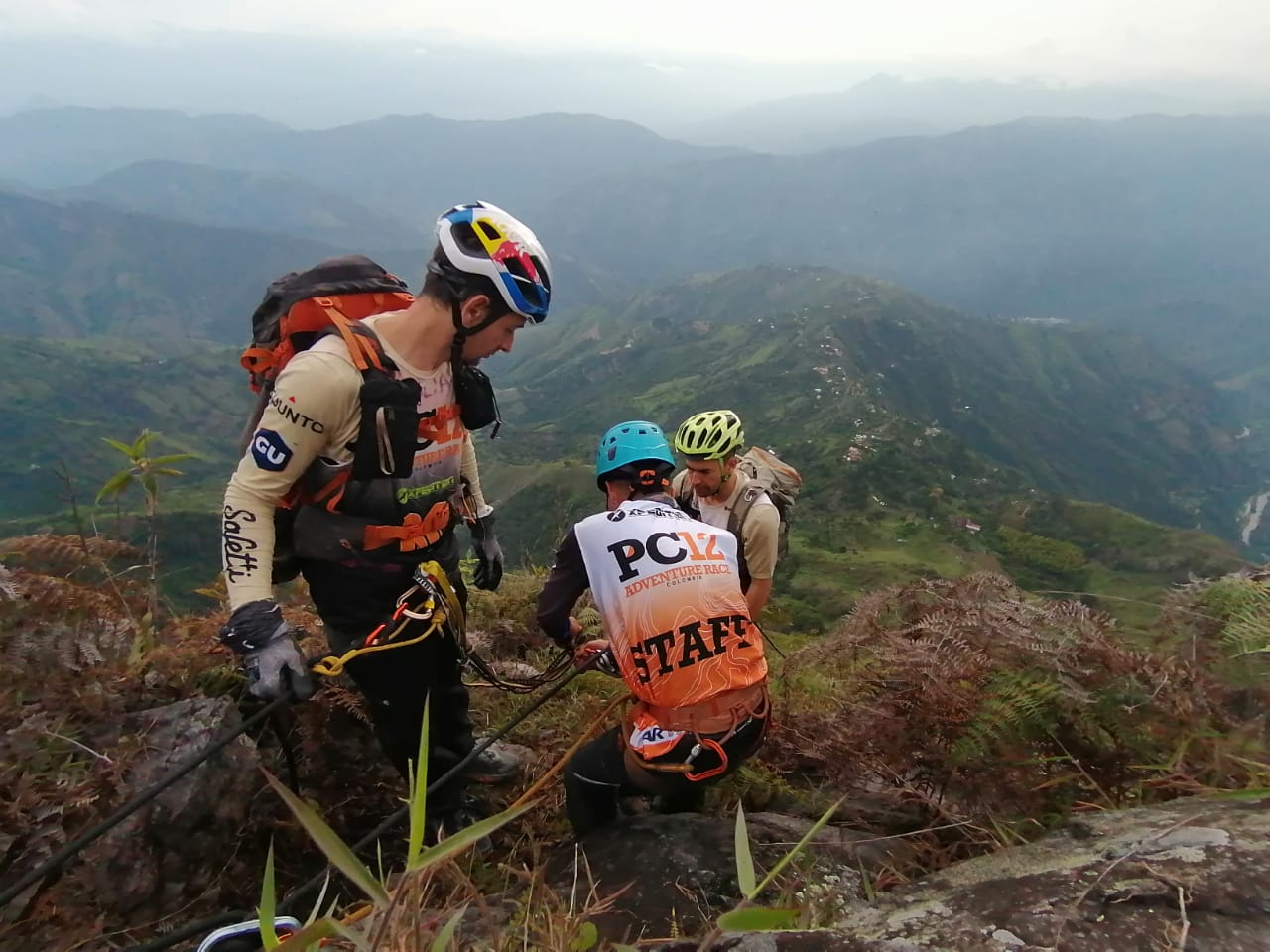 “The route was hard to the very end, with no cheap stages, and the highlights were the big rappel and the transition, which represented the organisers idea of the dream come true PC12. It was before the biggest trek and everything was there; showers, food, drinks and a place to sleep.

“Most memorable was the way the trails passed private property, almost going through the people’s bedrooms! Colombia stands out in this way and, while you might think of its notorious past, our experience was of open gates, and kind and helpful people in the villages.

“The race was organised at the highest level. Its toughness, the winner’s time and the quality of the maps, TA’s, logistics and safety, were all excellent and there were lots of staff, who were always friendly and helpful.  The TA locations were in town centers and the briefing and after party were in fine tradition, with local dancers to entertain us.”

For those who are looking for a dream race and a rich South American experience, it sounds like they might find it in the mountains of Colombia while searching for the mythical PC12.

The next race in the Adventure Racing World Series Calendar is Expedicion Guarani in Paraguay, starting on July 9th. 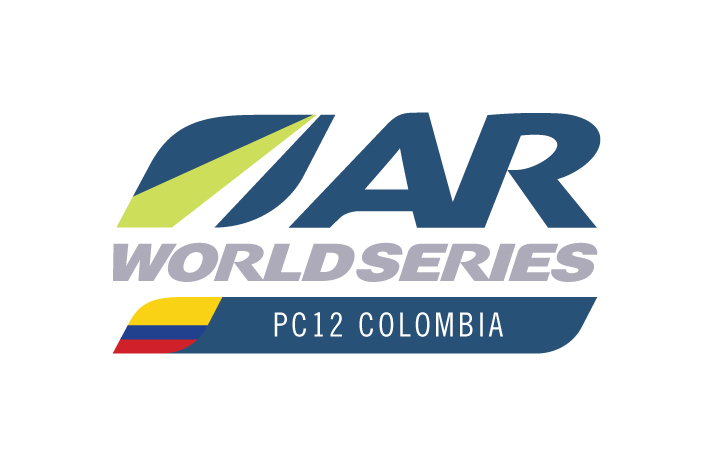