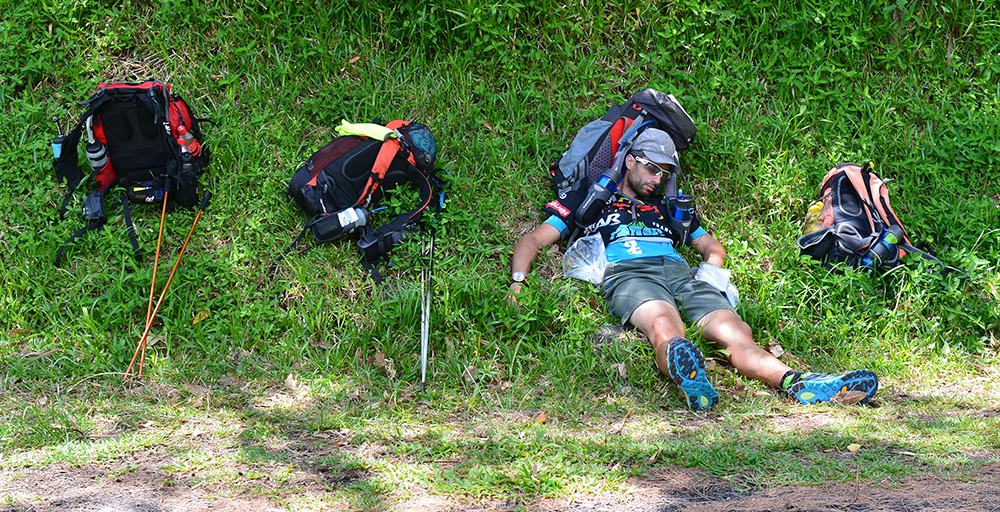 The closing ceremonies for a remarkable 8 days of racing on Reunion Island took place at Village de Corail tonight.

The beach side holiday village has served as a spacious and relaxed race HQ for the event and accommodated everyone, so it was only a short walk to tonight’s open air ceremony. It was held in the central courtyard, next to the bar, and dress was very informal!

As usual the event was a mix of speeches and local entertainment (drummers and a band), though it was the presentation of the teams and the race video footage which was the highlight. There was acknowledgement too of the work of the race staff, who have real community spirit and have helped the teams in every way possible while they have been here.

One in particular was invited up on stage, Pierre Beguin, who was course planner of all the original Raid Gauloises and something of a mentor to Pascal Bahuaud.  He’s been working with the ropes staff here.

The night was a chance to come together to celebrate the race and everyone’s achievements, primarily the racers of course but the organisation and all the supporters and sponsors on Reunion too. There were sponsor prizes for the fastest on the first trek (Haglofs Silva) and the fastest sea paddle (Yealands).

Some teams had been resting in the village for a couple of days now, but the final finishers had arrived only this morning so didn’t have a lot of time to recover before the ceremony.

The final 4 teams had crossed the line this morning,  on day 8, and the last full course team over the line were Run Zourit with a race time of 195 hours 30 minutes and 5 seconds!

They followed Uruguay Natural Sports and Olympus Red Ants in celebrating finishing the course, and behind them, and the very last, were the short coursed Team Belgium.

All of the teams, whether ranked or not, were welcomed on stage tonight to be greeted by Pascal and Nancy Bahuaud and to receive waterproof packs from race sponsors Zuzupack, and at the final count there were 28 teams with a full course ranking, so nearly half the race field.

The teams on the podium spoke, starting with Sebastian Raichon, and he spoke passionately and at length (I’ve no idea it was about though), but he did briefly say in English that this can’t be the last Raid in France and that it must continue.

His team mate Nicolas Seguin also spoke, remembering Julien Samon of the Swiss Powerbar Explorers team, who was killed in a cycling accident recently  and everyone stood and gave long round of applause in loving memory of one of their own.

Nathan Fa’avae made a particular point of thanking the race and the staff for all their hard work and said it was the lure of Reunion Island that brought him back to racing, and that it didn’t disappoint.

Whatever their result all the teams will go home after tonights meal and party with memories of the incredibly scenery here on Reunion Island.

ARWC 2018 was a race they will never forget! It was magic.