The town of San Martin de los Andes welcomed 31 teams from around the world to the Argentinean Andes for the Patagonia Raid, the first stage of this year’s Adventure Racing World Series.

Set on the lower slopes of the mountains and on the shore of the huge Lago Lacar, San Martin is a resort for both summer and winter outdoor sports, with good facilities, including extensive mountain bike trails. The race made good use of these and took place around the lake and in the hills above the town in near perfect conditions, with clear blue skies and hot sunny days.

There was a strong international entry with the race favourites being the world #2 and #4 ranked teams, 400 Team Naturex (FRA) and Columbia Vidaraid (BRA).  As the teams set off from the town centre in the pre-dawn darkness they were among the leaders on the first cycle stage, and the race was to develop into a titanic struggle between these two world class teams.

A crimson sunrise came quickly as the teams rode westwards to the far end of Lago Lacar on the first ride.  With the trail conditions fast and the lower early morning temperatures it was a quick stage and the teams were soon out on the lake for a long rafting/sailing/paddling stage.  They had to complete a circuit and were allowed to use sails for assistance when the conditions were right.

The drought conditions might have been perfect for racing and for enjoying the scenery, but they did have an effect on the course, so this stage was an alternative to a white water river descent.  The dry conditions also lead to last minute restrictions from the National Parks on areas the race was due to visit, and provided super fast racing conditions.

Having completed the 4 to 5 hour paddle the teams were presented with a unique ‘rafting obstacle course’, flipping it, towing it while swimming and squeezing under a pontoon, before getting back on their bikes for the next stage.

Teams Motueka (New Zealand), Outdoor (Argentina) and Gymcity (Poland) were among the teams in the lead group, trying to stay with the pace of Vidaraid and Naturex.  These top teams don’t only have speed, they take setbacks in their stride, navigate surely and never miss an opportunity to take an advantage.

Both the lead teams had to deal with some major mechanical issues on the second ride, with Nick Gracie crashing and breaking his shifter and one of the French bikes tangled in some barbed wire. “We were within sight of each other when it happened,” said Gracie, “and it was almost like a bike fixing race to see who could get going again first.”

He added, “We were navigating well and gained some time on this stage when we swam 400m across the lake with our bikes instead of taking a long ride back around the shore.”

All of the trek stages were out and back loops up into the hills and the first one provided some great views for the lead teams.  “The views were insane,” said Gracie, “especially of the snow capped volcanoes. You could see so far.” 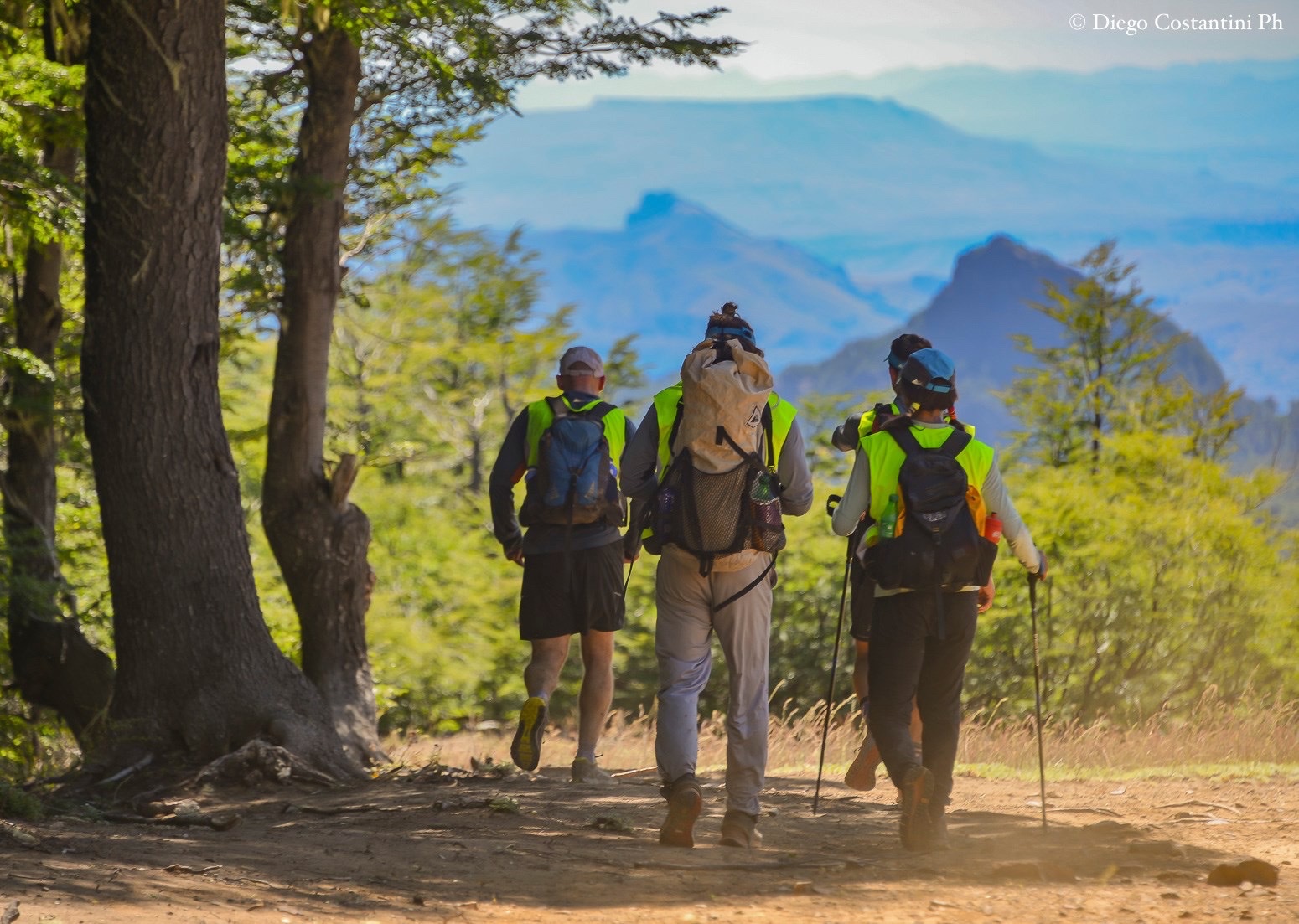 From the first night onwards Vidaraid and Naturex lead, swapping back and forth, and in sight of each other for long periods, while behind them another group of teams fought for a podium position.  The riding was on sandy and rutted trails, and adapting to restrictions placed on them the race included both foot and bike orienteering sections between the longer stages.

Despite these additions the race was moving at an exceptional pace, passing back through San Martin on the longest ride and up to a ski and snowboard resort for the second trek, after which Vidaraid came out ahead.

With a planned ropes stage having to be called off the leaders were now looking to push through to the finish during the second night with no sleep, and there was no let up in the pace.

“We were navigating well,” said Gracie, “with myself and Gui (Guilherme Pahl) taking turns on accurate and good quality 1:50,000 maps, but we made a mistake on the third ride bushwhacking across an overgrown canyon when there was a much quicker route.  We ended up with Naturex in the transition for the last trek, which was exciting and stressful at the same time.”

The teams were never far apart on that trek, but Naturex gained a lead and on the final bike ride looked to have the race won until a cruel twist of fate pulled the win from their grasp.  The route book instructed teams to get photographs at the final bike checkpoints, then to ride back uphill to the previous Transition for them to be verified, even though the finish was close.  Naturex hadn’t understood this and when they were turned around by race staff they pushed hard back up the hill, breaking an already repaired chain, only to have Vidaraid ride past them, and go on to take the win.

For Vidaraid it was a lucky break but they had given their all to stay in contention. “It was the fastest and in a way the toughest race for me,” said Gracie. “I had knee surgery in April and had not competed or trained much since, so the pace was hard to stay with.”

Pahl added, “I think it was the most intense adventure race and the best competition for me, fighting all the way.  As a team it pushed us to a new level and when we were behind we had to learn how to keep our motivation up at all times.  Jon (Ander Amambalza) kept us going and kept our heads up.”

Camila Nicolau laughed and said, “I have never seen Nick pushed and pulled so much. We were always saying ’Don’t give up’, ‘Don’t give up’ and inside were wondering if he could stay with us.”

There was drama behind the top teams too as the young Motueka team were pushing for 3rd place, only to be turned back from a route they’d chosen by National Park Wardens, and drop to 5th.  Gymcity of Poland took 3rd and Team Outdoor were the top Argentine team placed 4th.

The winning time of 41 hours 11 minutes was much shorter than expected, but the racing was at its most competitive and the faster finish did allow teams to enjoy the weather and explore the volcanoes and mountain bike trails at a more leisurely pace before heading back home from their Patagonian Raid.

The full results can be found on the race Facebook page at: https://www.facebook.com/raidelviento/