“This Huairasinchi was a really special one, one of the toughest of the past decade for sure. They were extremely hard stages with tricky navigation and on some stages we just concentrated on not getting lost, and then tried to push hard on the more physical stages. You had to really concentrate all the time to know where you were, and to move really intelligently through the highlands. The long treks up to 4000m were hard on the body and the elevation changes were huge. It was just a really tough, and very beautiful, race.”

Those were the words of Felipe Munchmeyer, the team navigator of Team Movistar Terra Aventura, after his team won this year’s Huairasinchi expedition race in Ecuador. It was their 4th win, so when he says that the race was tougher than usual, you know it was a very hard won victory, and that the teams behind them were pushed to their limits.

Huairasinchi is renowned as one of the hardest races on the World Series and teams return time and again, aiming to achieve a much-prized finish. The rich rewards of racing in Ecuador are a big part of the attraction too. The Andean and equatorial climate, terrain and eco-systems provide endless variety and stunning scenery, and the welcoming culture and peoples of Ecuador are always part of the race experience.

For this year’s race the base was the town of Patate, one of Ecuador’s ‘Pueblo Mágico’ in an area known as the ‘Valley of Eternal Spring’, and the course climbed high into the peaks and Paramo highlands of the Llanganates National Park.

Race Director Santiago López said, “We like the highlands, the people there and the beauty of the Andes, and we want teams to discover that. Teams will visit communities and experience their culture, history and food, and we have found lots of hidden trails and secret places.”

The course this year was 315km long, which is short by ARWS standards, but every kilometer at Huairasinchi is hard won and nobody was underestimating the race ahead. The route included 2 rides, 3 high altitude treks and a paddle, with a total of 11,000m of punishing ascent.

The race began well above Patate and immediately climbed to the race high point near CP2, at 4200m. This 30km trek would quickly spread out the teams and those who were not so well acclimatised had to adopt a careful and steady pace, especially as they were coping with heavy rain and cold conditions. The high mountain weather definitely wasn’t the eternal spring of the valley below!

The Fedeme Orienteering Team set off at a rapid pace to lead during this trek, and was the first to arrive at the 10km kayak on Laguna Pisayambo, where conditions remained difficult. The lake is high, and in fine weather has panoramic views of the surrounding volcanoes, but in the bad weather it was windy and rough for paddling, and extremely cold. 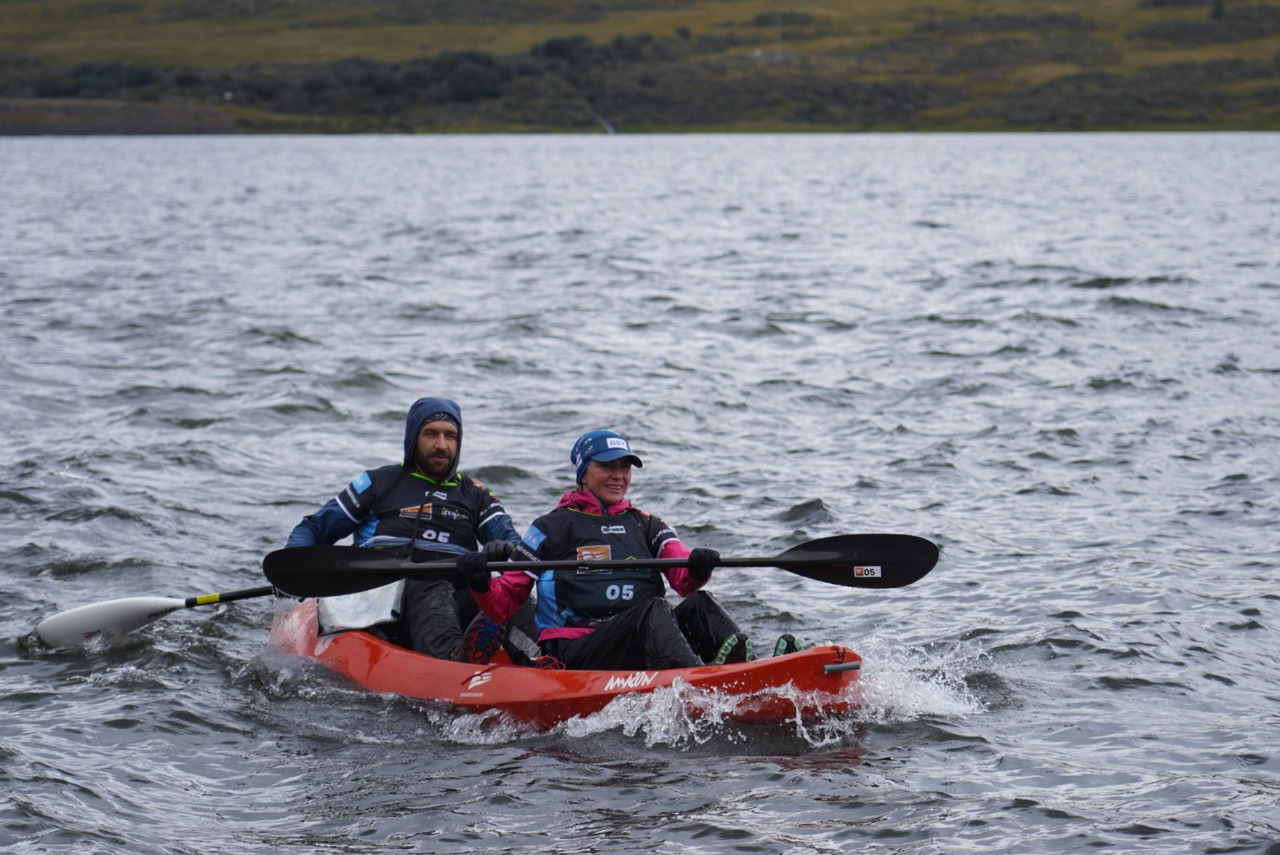 The two visiting international teams, from Colombia and the USA,had to adjust to the altitude and conditions, so it was a difficult start. Team thisABILITY from the USA were stunned by the scale and beauty of the landscape, and it took them a while to come to terms with the soggy Paramo. “It was other-worldly to find marshy ground at high altitude, and on steep slopes!” Said Andrea Anderson. “We expect swamps to be low down, in the valley, but we were over 3000m and running on a waterbed!”

Both teams had racers suffering from the altitude and were very cold at the paddle. “We were sitting in cold water for 10k in the dark at 3800m,” said Chip Dodd, the thisABILITY team captain.

Daniel Gomez of Saferbo Seti 2 said, “I was hypothermic after the paddle and took 2 hours in transition to warm up before continuing.”

This team included ARWS Race Director Ricky Velez from the PC12 Adventure Race in Colombia, and they used their experience to pace their race, stopping for longer in transition than the teams around them. “We took our time in all transitions, an hour or more at each, and were the only ones to do that as the others moved through quickly. They were worried about other teams around them, and we were not. We left fresher and any mistakes we made were minor and we caught teams leaving 2-3 hours ahead of us.”

The second trek was 43km and included a ropes section at the end. On a steep slope just before the ropes, one of the Fedeme Orienteering team fell in the slippery conditions. (She had no major injuries and is recovering well.) With ropes staff carrying out a rescue the teams who had not yet reached that point were directed to cut the stage short and move the next transition.

By this stage of the race Movistar Terra Aventura and Life Adventure Imptek were ahead and these two teams would be battling for the win over the rest of the course.

Fortunately, the weather improved for day 2, so progress on the first 51km ride was easier for most teams, but then came the final 51km trek. “This was the king stage of the race,” said Gomez, “it was predicted to take 12-17 hours, and we made no big navigation mistakes, but it took us 23 hours.”

With the weather deteriorating again teams further back were deciding which short course options to take to reach the finish, or deciding to retire, having given all they could for this Huairasinchi.

At the front of the race Life Adventure Imptek did get within a couple of hours of the leaders on the final trek, but couldn’t close the gap and Movistar Terra pulled away to record another win. They will take their place at the World Championships in Spain in a month’s time, but as Joaquin Lopez explained, Huairasinchi will always be their race.

“It is a really special race. It’s our home and our route. I was 13 when I first took part and I always look forward to it still. It’s just cool. We have learned a lot of lessons in sports and in our personal lives from Huairasinchi. Now I am 29 and have raced 9 times, Felipe has raced 11 times, and though we have travelled the world with ARWS, Huairasinchi is our favourite, always.”

When the results were finalised their winning time was 48 hours 1 minute, as it was decided that, for the purposes of ranking, race time should be taken from the final transition. Time adjustments had been applied to neutralise the stage affected by the accident, but teams didn’t all receive the same information as to how this would affect the rankings. This then affected their decisions on whether to take the short course on the final cycling stage, so for the purposes of achieving the fairest possible ranking, this stage was also neutralized.

The ARWS referees and jury panel are in place to deal with this kind of difficult situation, which does occur in adventure races from time to time, and for which there is no ideal resolution. ARWS Director Craig Bycroft and senior ARWS referee Adrian Crane helped to adjudicate the final results, working with the teams to find the best possible solution in the circumstances. (Race Director Santiago Lopez was not involved in these decisions.)

Of course, the rankings don’t change or reflect the experiences and achievements of the teams on the course, and two teams who shared some time together, but with different outcomes, were thisABILITY and Greenpack/Haku.

It was mainly due to the encouragement of Greenpack/Haku racer Luis Fernando Becdach that the US team had entered and they ended up travelling the course together, with the Ecuadorian team asking the way and for assistance in the villages. “We all arrived at one small village store,” said Anderson, “and they invited all 8 of us into their kitchen for food and drink. We got that open-arms welcome everywhere.”

Dodd added, “Having Spanish speakers to ask the way made a big difference as it’s not like there is one main hiking trail to find. There are dozens of cattle trails and paths between villages and farms to choose from.”

After a knee injury to Diederik Van Assendelft (who was escorted off the course by Brain Gaten), Anderson and Dodd continued to the finish, helping their friends in Greenpack/Haku to cross the line as the final finishers in 10th place.
It was a disappointing end for the US team, but Anderson said, “We’ll be back as it’s such a wonderful race with amazing hospitality and people.” 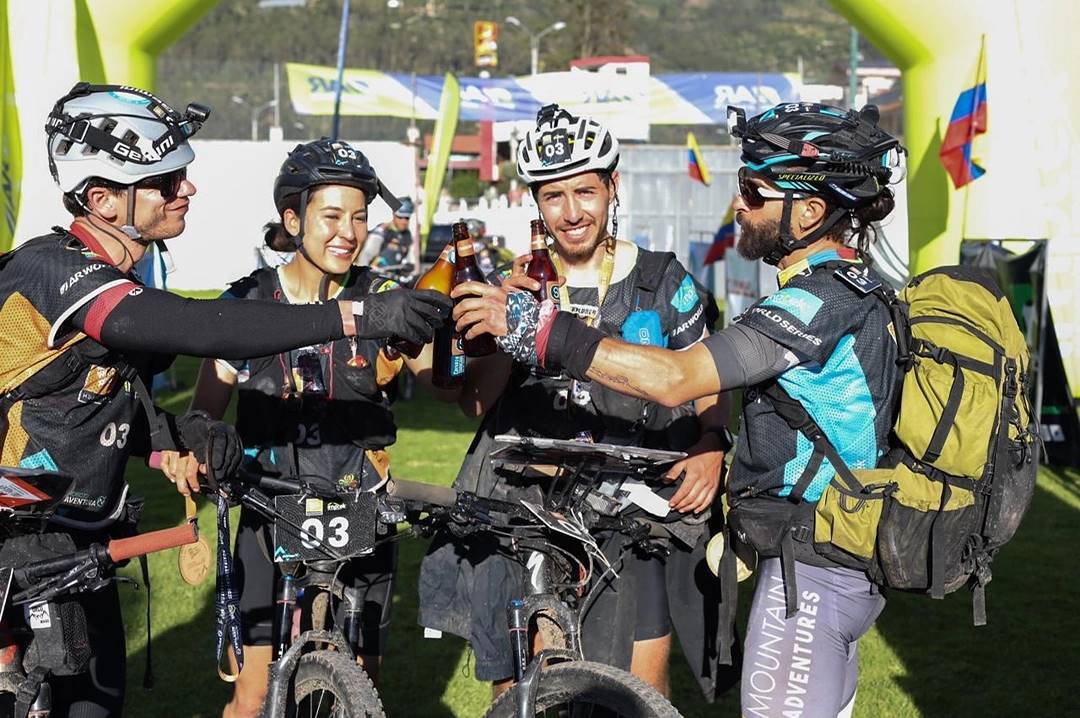 Huairasinchi is staged by Proyecto Aventura and you can find out more about the race and see the full results at https://www.proyectoaventura.com/site/2/huairasinchi

To find out more about the AR World Series visit; www.arworldseries.com