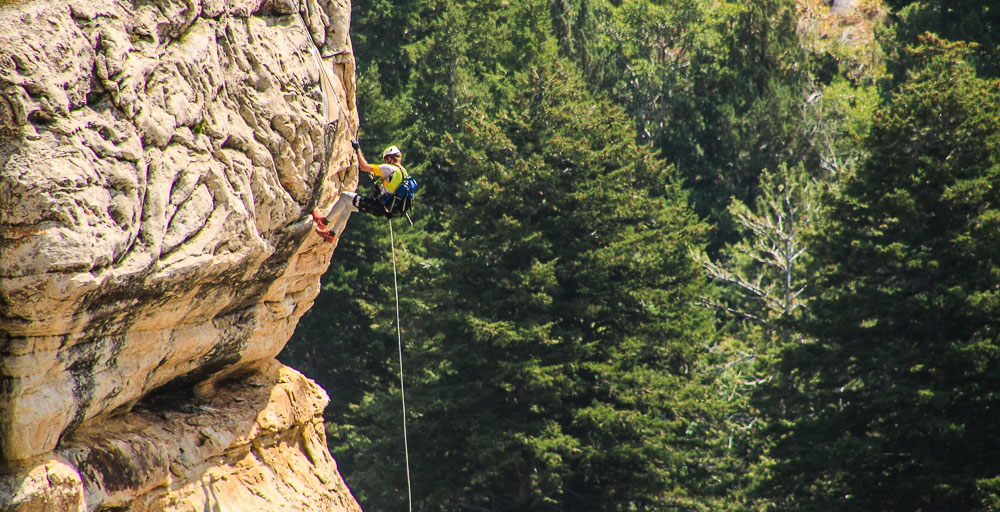 On the 3rd day of the 2017 Adventure Racing World Championships defending champions Team New Zealand Seagate had opened up a strong lead and were the first team to arrive at the ropes and caving stage in Sinks Canyon.

They’d slept for a couple of hours on the Wind River Range trek, passed through the transition at South Pass City and completed the 35 mile ride through the Shoshone National Forest before arriving at Sinks Canyon National Park at 09.45. The final part of the ride was a descent down the side of the canyon on the Brewers bike trail – a switchback, single-track descent which had the team smiling broadly.

“The ride this morning was through pretty scenery,” said Jo Williams, “though there were sections we were pushing for quite a while. It was very steep in places.”  Bob Maclachan added, “It was a nice change up after the long road ride we did.”

The transition was set up on the roadside at the Sawmill campground and directly beneath the imposing cliffs the team would soon be abseiling down, now lit in the strong morning sunshine.  This was one of two challenges, the other being caving in the canyon itself, but it was the rope descent Seagate opted for first. (The CP’s there can be collected in any order to help teams avoid a queue if either is busy.)

The leaders transitioned swiftly and efficiently as they always do. (Several volunteers have said to me how relaxed and calm Seagate are in transition compared to other teams.)  They used the nearby hand pump to fill up with water before crossing the road and climbing to the cliff top where they all used the same rope to descend.

While they were waiting at the bottom for their team mates Maclachan and Stuart Lynch tucked into their rehydrated meal packets.  (Most teams do this, filling up with boiling water from the transition and then setting off with the packet meal to eat later.)

I asked Lynch if recently becoming a father had affected his training and he said, “Yes, a bit.” Not that it seems to be slowing his team any.

After the abseil it was time to head for the cave and the team were told the route to it was flagged (otherwise they wouldn’t find it).  They followed the flags which lead them across the dried up river bed and then on up the hill on the far side of the canyon … which was the wrong way.

The cave was in the river bank, but Seagate headed on uphill for quite a while before deciding the flags had lead them the wrong way.  Eventually they got back down and found their way through the scrub to the cave entrance, with Chirs Forne muttering, “That was misleading!”

As they arrived a party of children had been about to go down into the cave but they kindly waited so as not to hold up the team.  The shoulder width entrance was just a gap in a pile of river-rounded boulders so if it wasn’t marked you’d never find it.  One by one the team squeezed through and disappeared from sight to descend 250m into the cave and find the checkpoint.  Lynch said, “It was narrow for about 20 metres, then opened out quite a bit.”

When down in the lower part of the cave the team could hear water running below them, and this is the amazing feature of the canyon.  The river Popo Agie (meaning grass river in Crow Indian), disappears into huge sink hole, only to reappear some 500m further down the canyon.  It descends in a swirling torrent, and comes back out as a spring-like trickle through the rocks to create a large pool, which is full of huge trout. (Where the water goes is unknown, but it takes 2 hours to pass through and more water comes out than goes in!)

The cave the team were in was in the dried river bed between the sink and the rise, which only ever carries any water in times of flood.

When the team returned to their bikes to begin the 163 mile ride I asked Lynch how they felt about stages which were not directly part of the route (i.e. out and back additions) and he said, “I’d prefer the rope descent to be part of the route, so we arrived at the top and continued on from the bottom, but these loops are a good way to include some great places in the race, plus they break up the long stages.”

That certainly applied to Sinks Canyon, a location the teams will remember of the single track riding, abseil, stunning scenery and a very special cave.

[The race referee was on hand when Seagate were lead astray by the race markers and will assess if they get a time credit. The markers were moved to lead the following teams directly to the cave.]
Previous Wyoming Range To Wind River Range – The Gap Opens
Next Resting Up, Re-Directs and Route Choices