For most teams Day 3 of the Adventure Racing World Championship was spent on the first kayak stage, or trying to get there in time to avoid the first cut-off of the race.

Race leaders Estonian ACE Adventure – La Sportiva had spent much of the night on the early part of the 90km kayaking stage, which involved some portage stages for safety, and by first light had reached the long portage which took teams 12km around several dams.  They said they had kept a steady pace through the night and used a small portable music player to listen to Estonian music to help keep them awake.  Their media support watched them through a later portage around another dam at the city of Ourense and said they were much quicker than usual at the portaging and very motivated. 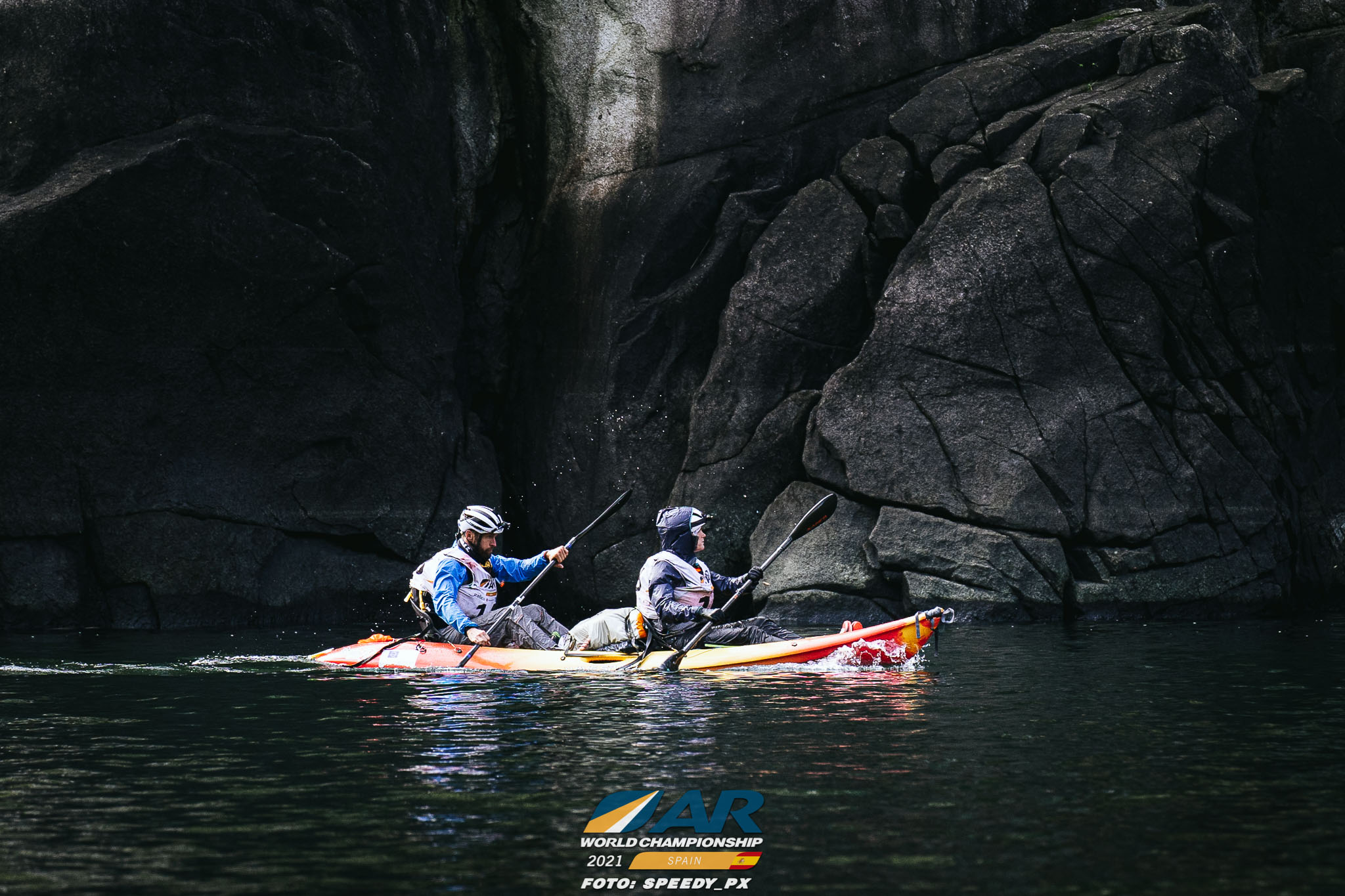 Had they known what was happening behind them they might have been more motivated as the second placed team, Blizzard of Russia, made a simple, but costly, mistake. Tired after two nights without sleep they forget to punch the checkpoint at the start of the long portage, and only realised after walking 5 or 6km with their kayaks.  Then they had no choice but to turn around, go back and get the missed CP, though they could leave their kayaks and didn’t take those all the way back. 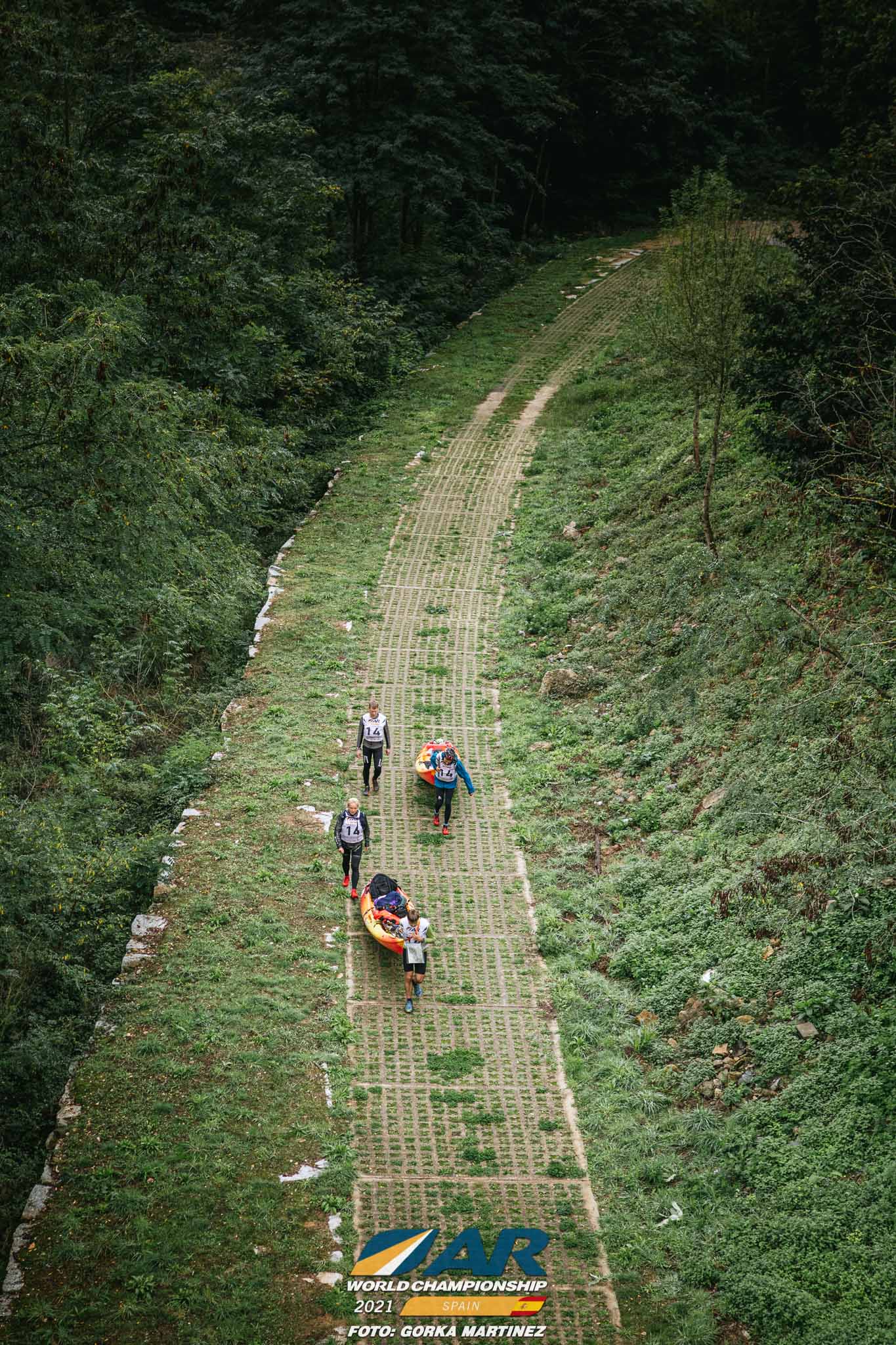 In doing so they met 3 other teams who now passed them in the rankings. This would have been a brutal experience for any team and to make matters worse the portage had a lot of climbing on it, starting with a long, tough uphill haul, which they now had to do twice. (This kayak stage had 450m of ascent!)

Some teams had difficulty with broken wheels or trolleys on the portage, and Team Endurance arrived at the finish with both kayaks on one set wheels, which seemed to be working OK.  The broken wheel set was slung over the shoulder of Maria Daniela Costa Tobar who cheerfully said, “We have to carry them, they are mandatory equipment!” 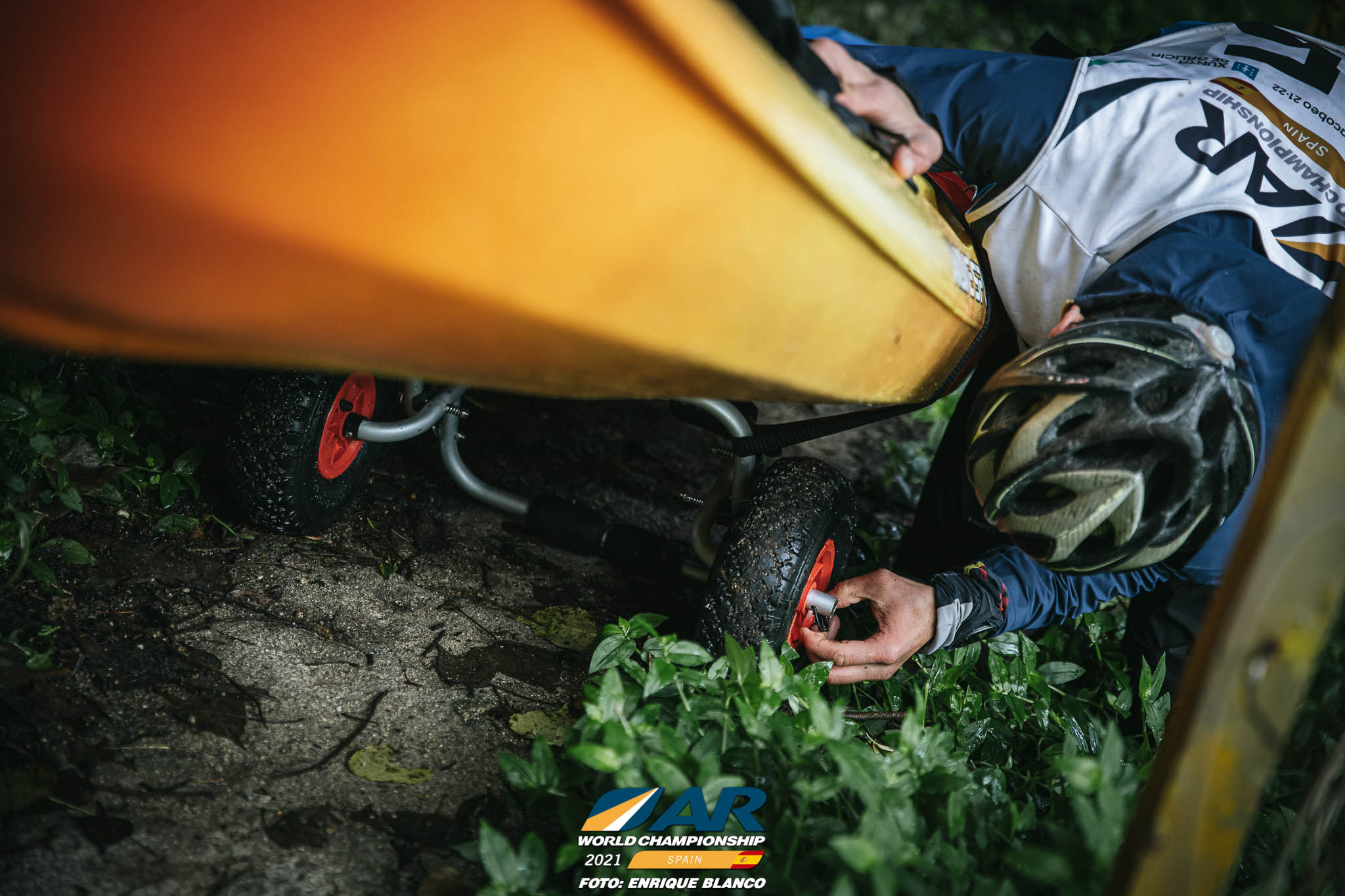 Just ahead of them, crossing a long bridge (one of 4 at that location where two rivers meet) were the world #1 team Team400 Naturex, three of them white coverall suits which made them look like laboratory workers.  Things were not going well for the team as Nico Seguin is carrying a groin injury and he said he was thinking of quitting, but would continue with the paddle and bike ride, but he wasn’t sure if he could manage the later trekking stages.

Later in the day, at the start of the portage, the UK Adventurers team were struggling with a sheared wheel nut and sought the help of legendary racer Antonio de la Rosa who was in the café there. The team stopped to eat while they could and said the canyon they had just paddled trough was amazing. (The canyon the portage road wound alongside was stunning too, but teams had their heads down with their labours.) 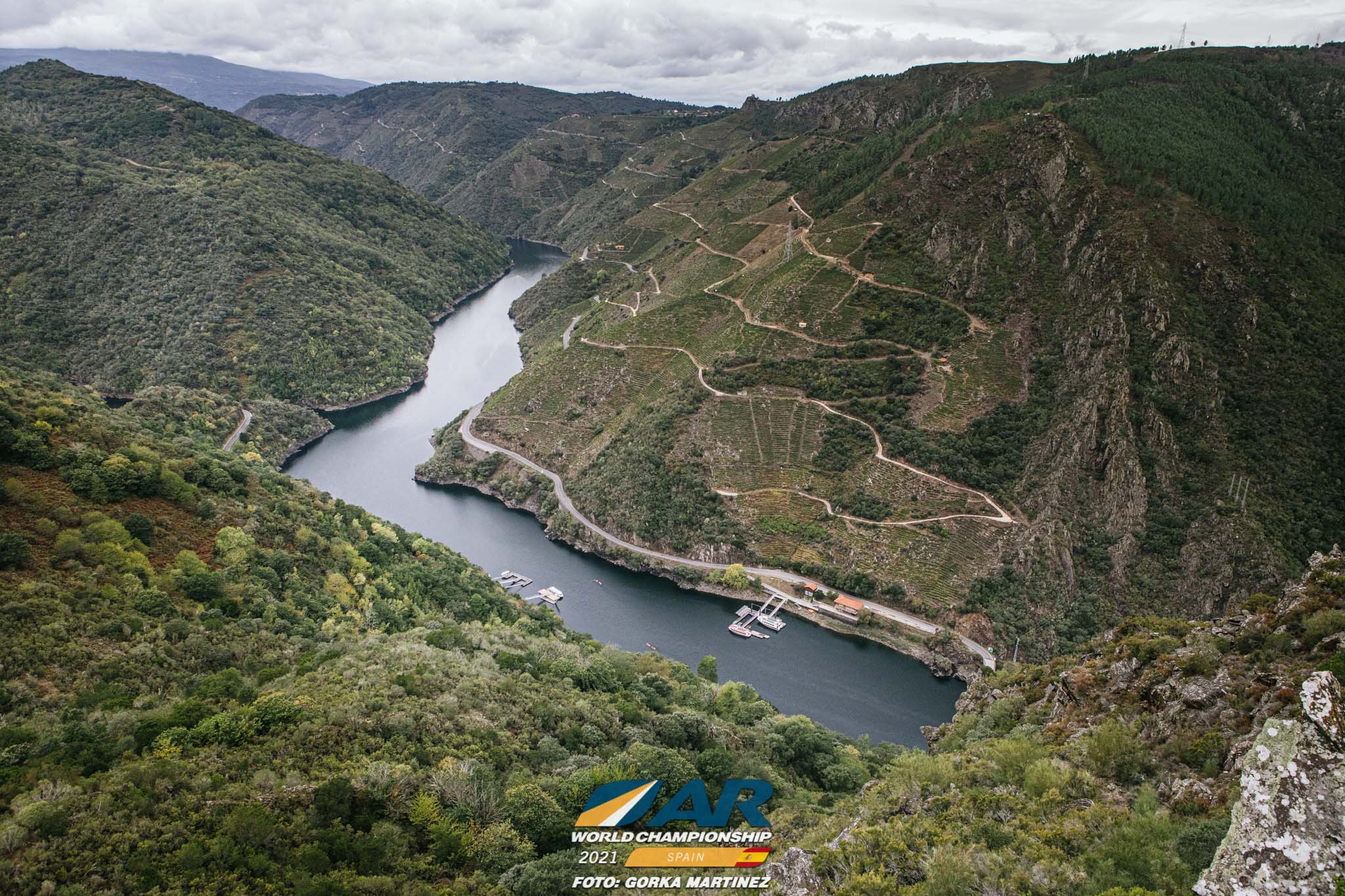 For teams further back on the course just getting onto the water was a priority, as the first race cut off was at the start of the paddle, at Transition 2.  Teams had to leave the transition in the town of Quiroga by 16.00, or they would be cut from the full course and transport nexted day to TA4 at As Pontes.

As the clock ticked round to 16.00 five teams were in the sports hall used for the transition, rushing to sort their equipment and get out in time.  The Strong Machine Adventure Racing team from the USA came out in good time, with a whole 10 minutes to spare.  Kate Hanley-White said she’d enjoyed the second, mountain biking, stage and that the team had been under pressure to arrive in time. She added, “It was thanks to Mark’s speedy navigation that we arrived in time to sort ourselves out without rushing too much.”

She was speaking about Mark Lattanzi, a renowned navigator (and author on the subject) who said, “The last part of the route into town was difficult and slow as trails disappeared, then we got onto logging trails which were unrideable, and then we had to find a way through the streets to the TA, so that just added to the pressure.” 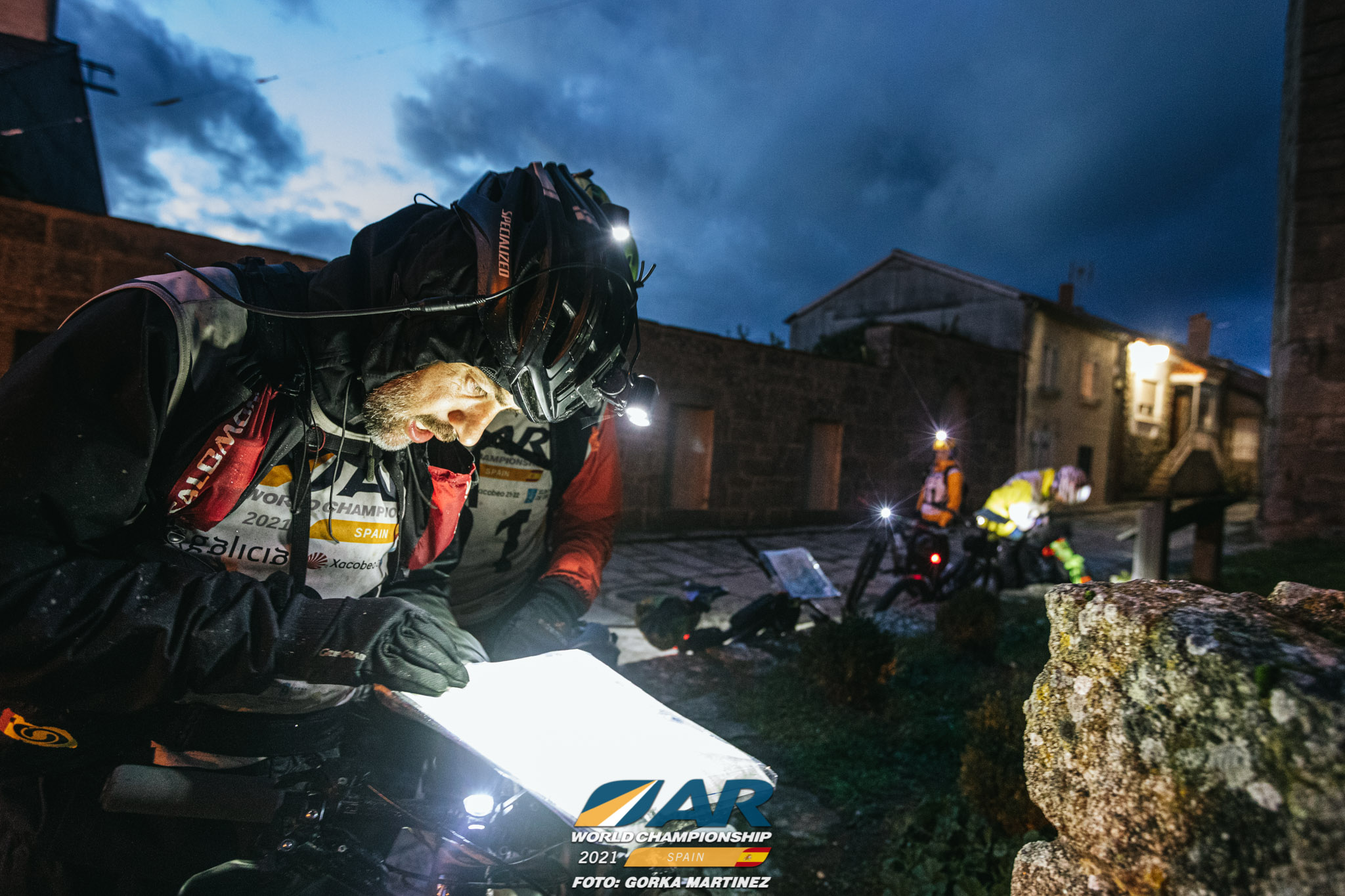 [The team includes Mike Garrison, the new USARA Chief Exec, and in the hall at the same time was the Danish federation chairman, Johan Thorup Nielsen, while in the café around the corner Marek Navratil, founder of the AR European Series was having a consolation beer after his team withdrew. Neilsen’s Delta team has also withdrawn.]

At 16.00 the Aerolia.eu team from France where hustled out of the door, half dressed, barefoot and with arms full of clothes and equipment and they joined several other ejected teams outside to eat and sort themselves out, but still in the race on the full course.  (They had to carry their kayak bags to a nearby field to pick up the kayaks, then portage these down to the river, so it would be some time until they got on the water.)

At the final count (unofficially) 62 teams had made it through the cut-off, so just over two-thirds of the field; 6 teams had continued unranked having missed checkpoints or without a full team, and a further 4 teams had withdrawn at the transition.