Refereeing The AR World Series – It’s A Tough Job, But Someone Has To Do It! 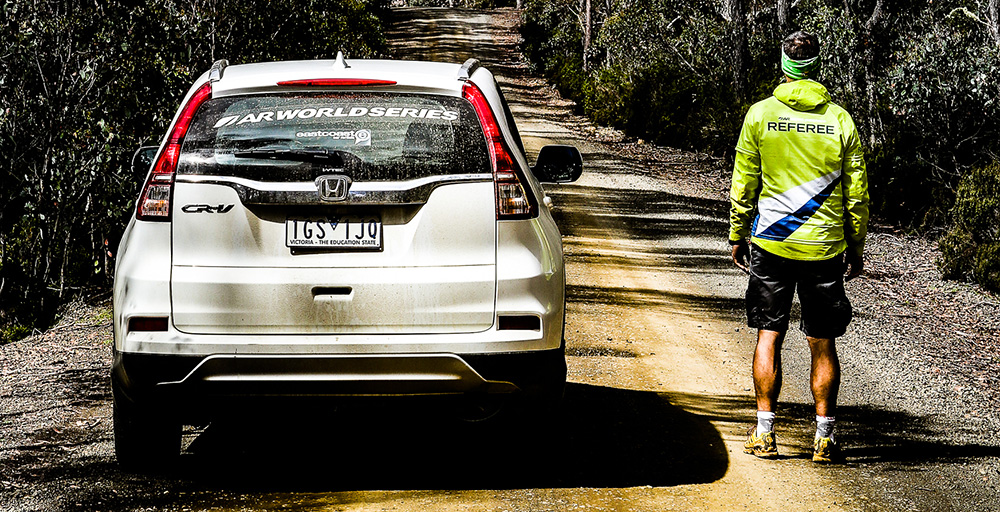 Who’d be a referee?  It’s a tough job taking sides, having every decision questioned and taking abuse from the crowds … but in World Series Adventure Racing it’s not like that, not at all.

There’s no crowd to win over, no sides either, and the teams being adjudicated are generally supportive of the referee being there, often glad of a clear rule interpretation.  It’s still a tough job though … there’s the lack of sleep, harsh conditions, unforeseen events and complex rules, and the ‘playing field’ will be hundreds of square miles of wilderness.

For 3 years now there have been referees in World Series adventure racing, and it’s an innovation that has largely been welcomed by teams and races and is gaining momentum.  The referees are volunteers and are appointed by the ARWS.  They are independent of the race they are officiating at, there to make sure the rules are clear and followed, and that penalties are applied if they are not.

Craig Bycroft of the AR World Series explained the reason for their introduction.  “I introduced referees because of the frustrations teams felt when there was an incident at a race and they had to be penalised.  Introducing the rules was a precursor to this of course. Teams want fair races, particularly those who are competing at many races each year and encountering problems more often. As the sport grows, so too does the professionalism of the organization and management, including referees.”

He introduced the concept at his own race, ARWC 2016 in Australia, where Mark Harris and Arthur Raichmann were referees. “From my perspective it was a huge success,” he said. There were some penalties applied in a close race and the independence of the referees took some of the pressure off of the Race Director, in this case Bycroft himself.  His time and energy was spent managing the race, not the results or disputes … and he preferred it that way.

“Race Directors have a lot of responsibilities,” he said, “and adjudicating the rules have traditionally been one of these. But it really shouldn’t be that way. If you go to any sports event, you don’t find the organiser out on the field calling penalties, and adventure racing doesn’t need to be any different. Referees can take a lot of stress off of the organiser and let them focus on creating a great race for the teams, but without the ARWS providing referees, sometimes races find it hard to justify the resources to dedicate someone to this role.”

“It is still early stages but we are aiming for all the Qualifiers to be attended by an independent ARWS referee and the World Championships by at least two senior ARWS referees.  Most Race Directors are now seeing the benefits of this but it has been difficult for some to give up control.  However, with someone independent making the decisions they never need to be the ‘bad guy!”

There is much more transparency at races these days.  The referees have the time and authority to explain rules to teams and answer questions, often doing so in briefings before the race.  They also head off potential infringements where ever possible, warning teams on what they will be looking for or for minor infringements.  They will meet teams for gear checks early on the course so the teams know they can’t take any liberties and when penalties are applied they are explained and listed for all to see at transitions.

Teams now know they can and will be checked anywhere on the course, day or night, which is not just about the rules, but their safety too.  And in turn this means they don’t feel a difficult obligation to ‘report’ anything they see which is untoward, which they have in the past.  Now they know the referees are there and will be looking for rule bending or breaking.

The referees go to great lengths to see the course and check all is well.  Igor Dorotic said, “If a have a chance I will do some of the legs and teams are often surprised to see me pop out of nowhere from the bushes checking whether they have all the right gear or if they are breaking any rules.

“I remember a situation in Australia when I was at one CP waiting to see if the teams would send only one person to get that CP because it was an out and back. I was pleasantly surprised to see that all four members from all the teams came to that CP not knowing I was there.” Igor is the Race Director at Adventure Race Croatia and is now at the Nordic Islands Adventure Race as referee. (Teams, you have been warned, he may pop up where you least expect him!)

Adrian Crane is the most experienced ARWS referee having worked at two World Championships and 2 series races, and he will be at ITERA in Scotland in August.  His experience is that; “ Teams that receive penalties are usually accepting (once we have agreed on a rule being broken!) as it reinforces that other teams are also following the rules or being penalized. I haven’t yet seen any rule breaking out of malice but in desperation, exhaustion or confusion teams can gain an unfair advantage which the referees can compensate for.” 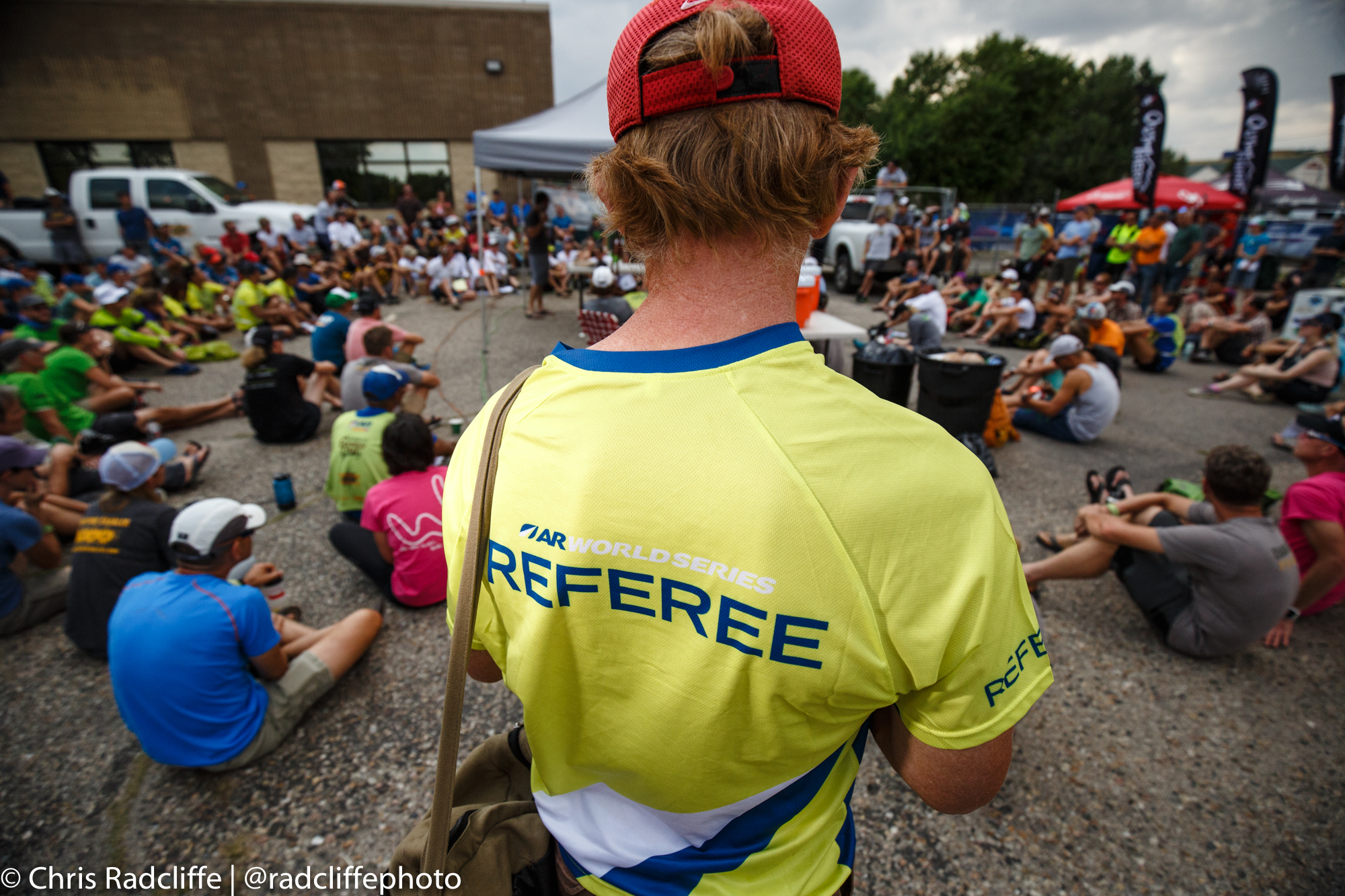 He added, “As a referee I review all the instructions, rules and route information given to racers and try to travel on large parts of the course so that I get a competitors eye view of what they are faced with. If a team is seen to break a rule I can be in a position to understand what their options were, what the terrain and safety considerations were and fairly evaluate their actions.

“On one occasion I returned to part of the course at night and paddled across a lake, alone in the dark, to see what buoys were present and how the wording of the route instructions meshed with the actual terrain.”

Another experienced referee pairing are Australians Greg Hollands and Beta Zadnik who have been at races in China, South America and Europe.  Greg commented,

“Raid Gallaecia 2017 in north western Spain was the first ARWS event Beta and I attended as referees, having previously, and since, volunteered in most roles at adventure races for almost 20 years.  In Spain one of the leading teams had misplaced two items of mandatory kit attracting a substantial time penalty. To be fair, and allow some of the lost time to be made up by racing harder, we decided the penalty was to be waited out at the last TA. We hadn’t realised this was actually in the centre of a major shopping centre where the team were sprawled out snoozing in full view of the public, similar to the old stocks and pillory!”

He added, “At Expedicion Guarani we had the assistance of Alen Pujol learning the ARWS way prior to his successful refereeing stint at Huairasinchi Expedition in Ecuador.  Alen’s multiple language skills made it easy for many.”

Pujol went on to referee a complex race in Ecuador and commented, “I volunteered because I truly believe that it’s important in all sports to have someone impartial to provide some justice and to control compliance of the rules. This is especially important in Adventure Racing where the competition area is usually huge, teams may be separated for hours or even days and safety becomes extremely important.

“I too am an adventure racer and I know that in the rush of preparation and competition, we sometimes forgot the basic rules and that may turn into a safety hazard. In my experience, racers feel a little less than happy at first to have a referee in sight but they always realize later that it’s necessary and are thankful.”

Language is often a complicating factor in ARWS refereeing of course so Pujol’s command of Spanish and English was essential at Huarasinchi, and at ARWC Reunion Adrian Crane worked with Beatrice Lambert from France. The mentoring of new referees by those with more experience is also something which the ARWS want to encourage wherever possible.

Bycroft said, “It is a process of growth as we find people who have the right skills, experience and attitudes to be a referee.  We test them out at a race, often with a senior ARWS referee where possible, so they can develop the skills and experience to do it on their own.”  He continued, “We maintain a report from the referee after the race that is available for other referees to review and it is a way we can maintain consistency across the world.”

Referee at two recent events has been Lars Bukkehave who was one of those behind the introduction of the referee programme for the Danish Adventure Racing Union some 6 years ago. It’s now well established and accepted in Danish racing and he brought his experience to Adventure Race Croatia 2018 and Raid Gallaecia this year.

As you might expect he is a strong advocate of the referee programme but another ARWC referee Arthur Raichmann of Estonia has some words of caution.  He feels that ARWS refereeing “is still to find its role and part in the game,” and that “the referee can definitely spoil the competition (think about any sports event) but has to create a fair playground under any given circumstances.”  It is clearly not always an easy balance to apply the same rules when circumstances change and some teams are elite racers while others are ‘adventure tourists’.

Bycroft added, “It can be stressful for referees sometimes because there can be hard decisions to make (just like referees the world over).  There can be a lot of pressure to make the right decision and often it will make some people happy and others not. There have definitely been some tough decisions referees have had to make.”

So, yes it’s a tough job being an ARWS referee, and one which is still under development, but with the reward of visiting some amazing places, helping extraordinary teams and making the sport as fair as possible for them. 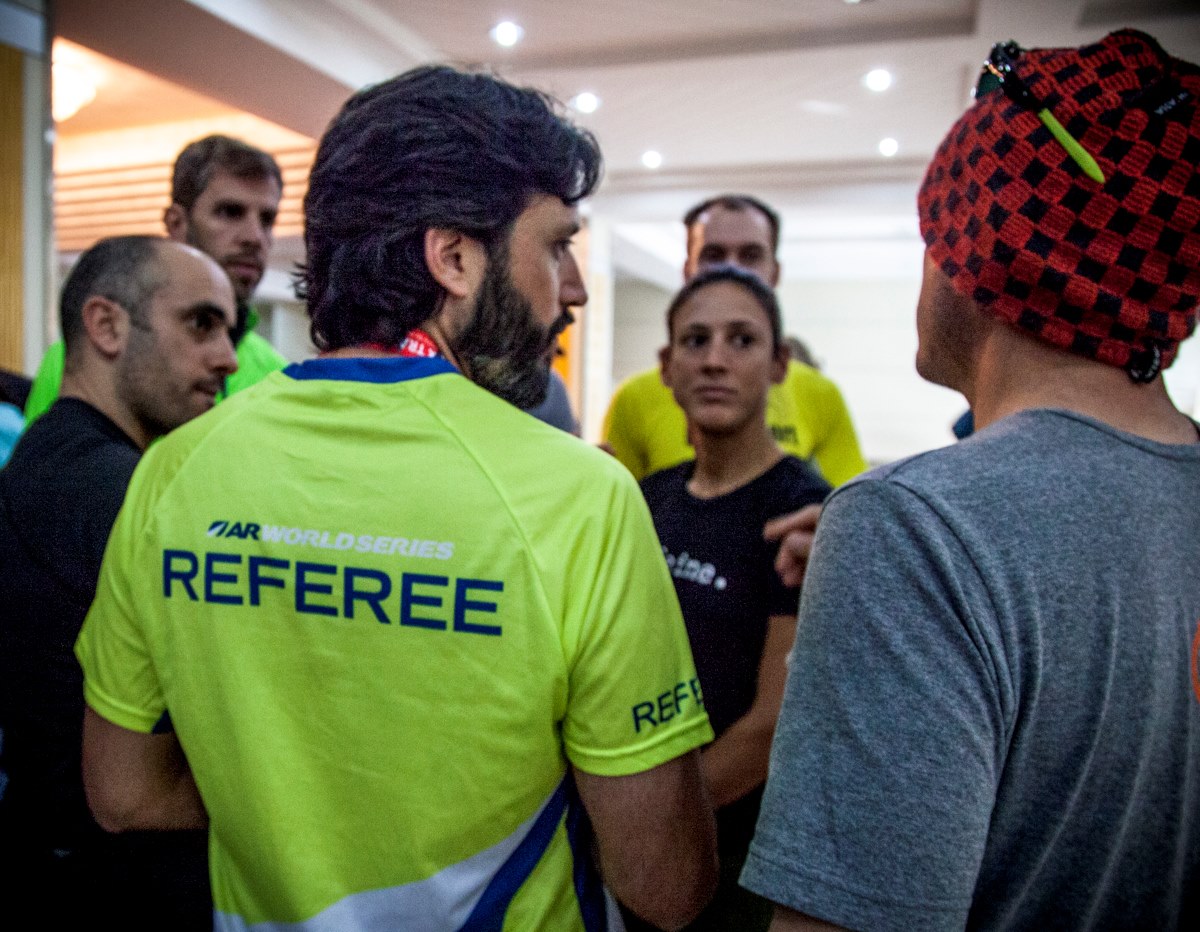