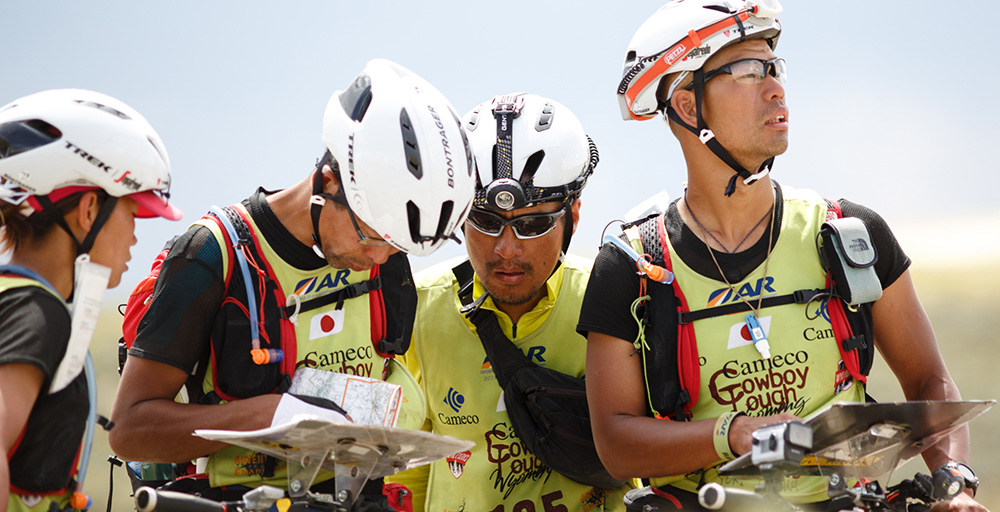 After the big hills of Wyoming the penultimate checkpoint on the 2017 Cowboy Tough course was set on top of Casper Mountain, overlooking the finish line in Casper itself.  In the context of the race it’s not a big climb, but it’s all relative and coming right at the end of the race it was always going to be a tough climb – it was the last hurdle.

The mountain is Casper’s outdoor playground and has a maze of trails plus many campsites and clubs, and in amongst this the teams were looking for CP35, hung at the edge of a visitor information board.

The first team I saw there this morning was a combined team of 3, the remaining racers from Lupine Racing and Adventure Addicts Racing.  They were still on a mission so didn’t stop, just said in passing – “what a crazy race!”

Soon after Team East Wind came along, still on the full course and judging by the little shouts of joy they were very happy to find the checkpoint.  It was nice to see they all got off their bikes to visit the CP together and all this was caught on film by the TV team following them.  They are without doubt the most filmed team in AR, Seagate don’t get a look in when it comes to TV time!  (And it’s not easy to get a photo of them without a cameraman in shot either!)

Another full course team soon followed, Outnorth Adventure of Sweden and they were followed by Team Monarx, still all 4 together but wearing the orange bibs of a non-comp team.  “We narrowly missed a cut-off,” said Scott Mead, “so we are wearing the bibs of shame. We’ve given them other names too!”  Their prison-gang orange colour has inspired many creative names!

“We had to push a fair bit on that last climb due to the mud,” he added. “It was pretty thick after last night’s storms, which we managed to shelter from in a U-haul trailer.” Lifting his head almost as if smelling the finish he then shouted to his team, “Let’s go get this thing done, we’ve been battling it for days and it’s time to finish!”

The mud resulting from yesterday evening’s intense storm affected all the teams but none more so than Untamed New England who arrived at Casper Mountain with the trail in the worst condition. They just couldn’t make progress up it and in the end chose to back track and ride around the mountain and up from the other side!  They lost a place as a result and Race Director Mark Harris said, “I think if they’d waited where they were for a couple of hours the trail would have dried out enough to get up, but they didn’t know if it would start raining again!”  It was a case of very unlucky timing!

The storm hit yesterday evening, with heavy rain, high winds and lightning … and Untamed were caught out in it while pack rafting as well, in what they described as some “very scary conditions”. What with Jesse Tubbs breaking a finger on the prologue it’s been a tough race for this team, but they keep going and finished in 19th place.

For safety reasons teams were advised not to paddle once the storm hit and for a few hours the race stopped and hunkered down waiting for it to pass. It was a chance to rest up if teams were in a comfortable place.  The deserted buildings at Ferris were one place teams and staff gathered, and there were reports of teams caught out who sheltered under their inflated pack rafts! The race had two checkpoint tents blow away and another take off at the finish (and it was heavily weighted down!)

At the time of writing (Tues afternoon) another heavy rain storm has just hit Casper, so those trails up the mountain will be turning to mud again and making that final hurdle that bit tougher!

Previous An International Top 10
Next Winding Down in Wyoming