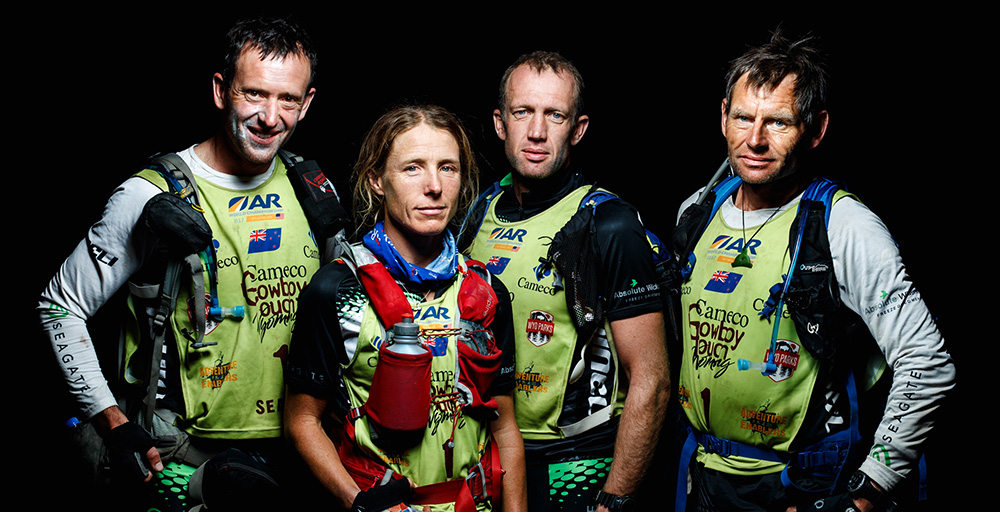 For the adventure racing fans dot-watching around the world the progress of Team New Zealand Seagate to the finish line of the AR World Champs at Cowboy Tough in Wyoming seemed assured.  But the world’s most experienced and successful AR team know it’s not over until the finish line and that anything can happen … and it very nearly did!

On the finish line Bob Mclachlan explained, “We were coming off the final descent from Casper Mountain and had stopped to wait for Stu, and he rode straight into Chris! Maybe he was looking at his map but he broke his brake rotor and we had to take it off so he came down with one brake and I rode beside him, just in case!”

It was a brief alarm at the end of a near faultless race, and not one which team Seagate were going to worry too much about as they came into Casper to win their fourth consecutive world title, and their 5th altogether.  It was another dominant performance and they finished many hours ahead of the chasing teams.

Mclachlan added, “I think the final stage is the one we are most nervous on. We thought we had a good lead but didn’t know for sure and by that time there is only the finish to think about. No more stages, no more transitions, it’s just about finishing!”

Stuart Lynch, who was winning an incredible 6th World Title (as is Chris Forne)  said, “We felt we had a lead, but made the odd mistake and wondered if the others had caught back up.  I think it was on that second trek that we all felt good and pushed hard and felt it would be hard to stay with us. Then at the caving we completed the stage and left without anyone arriving so knew we had 90 minutes lead at least. After that I think we could have managed our sleep a bit better – we got a bit too ragged at times, but kept pushing hard. ”

He added, “It’s nice to continue the tradition for the team the first time without Nathan (Fa’avae) being with us.  This one is for him as much as us, but we’ll still tell him about all the good stuff he missed!  Though I don’t think he’d be jealous of that 160 mile bike ride!”

Asked why Seagate are so dominant he said, “I think it’s the team work. I’ve raced in other teams but none can match the teamwork in Seagate. We all know how to look after each other, and to ask for help if we need it.” Asked who lead in Fa’avae’s absence he said, “It was pretty democratic really – just whoever was feeling the best at the time.”

Mclachlan also commented on Seagate’s successful formula. “I think it’s the fact all 4 of the team are at the same high level. If you have one slower team mate then you lose two as someone has to look after them, but in this team we all keep up the pace. Jo has been great, she’s so strong.

“My favourite part was probably the single track descent into the caving stage. That was great as adventure racing shouldn’t all be about endurance – you need the fun stages too. The trouble with adventure racing is you miss some of the good stuff in the dark, but we saw some great scenery on the route.  When you drive through Wyoming you see the mountains in the distance, but you have to get into them to really experience what Wyoming has to offer. And on this course we did.”

In the excitement of the finish, with all the interviews going on, the team had neglected to technically finish!  Race Director Mark Harris called out to Chris Forne to come forward and put his timing chip into the finish line box to record the team’s race time.

For the record it shows as 79 hours 13 minutes and 30 seconds – not that it matters to Seagate – they are just enjoying their victory now, having a well earned beer, some food, calling home and looking forward to a night’s sleep in a bed.  They’ve earned it!

Previous Resting Up, Re-Directs and Route Choices
Next The Podium Places Are Decided