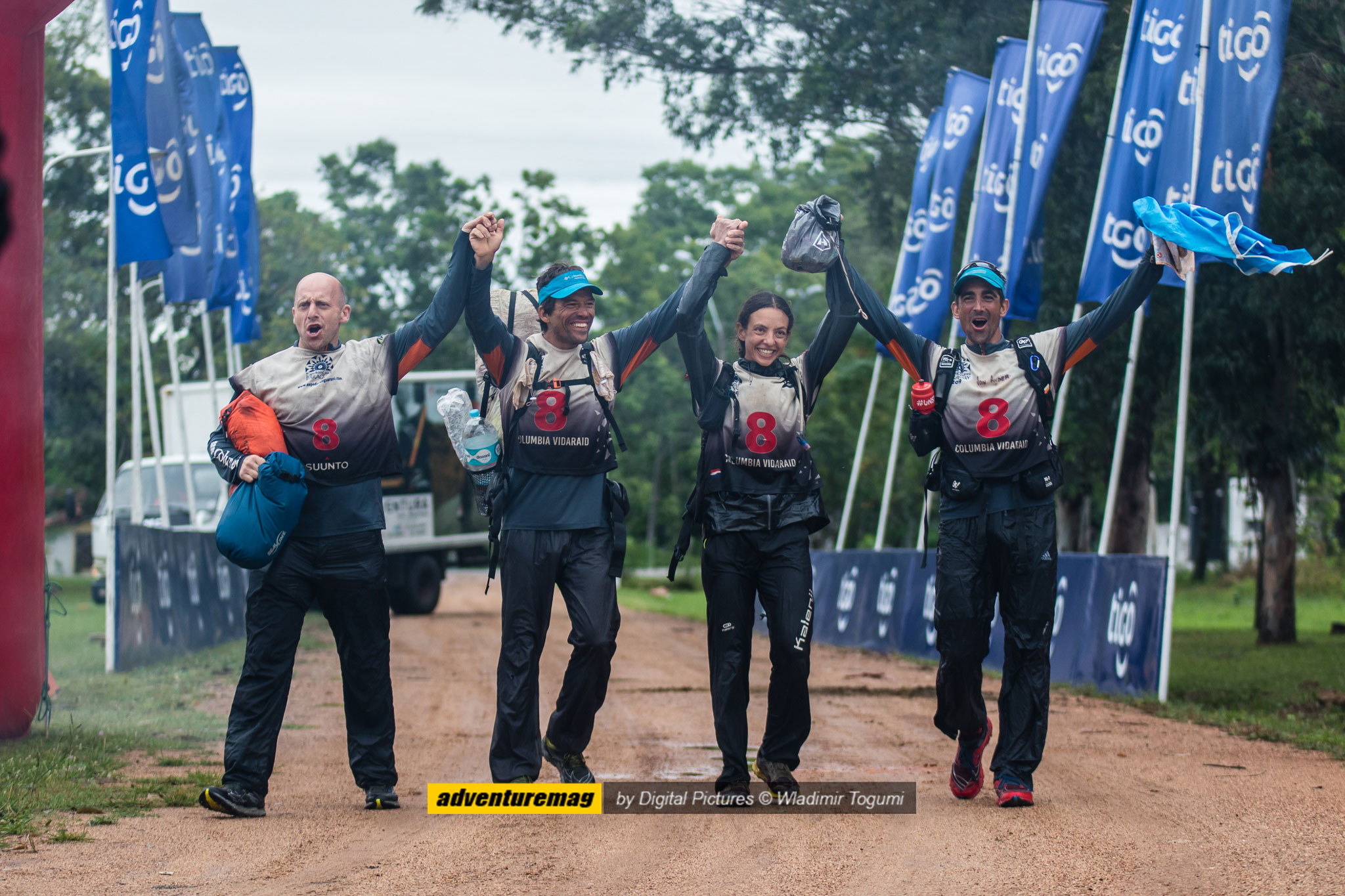 Expedicion Guarani in Paraguay was the second Adventure Racing World Series event of 2019, and it was also the toughest in the 5 year history of this South American expedition race.

The race winners were Team Columbia Vidaraid (Brazil) and after a faultless race they completed an epic 27 hour paddle down the Tebicuary River to finish at Villa Florida in the town of Manga Yvyra.  The course was so demanding the winners finished just 16 hours short of the race closure and only 3 teams managed to complete the final paddling stage.

In total 15 teams took on the 500km ARWS course (and another 15 the 300km adventure course) and the podium places were taken by teams from Brazil, Uruguay and Paraguay.  Other nationalities taking part were Spain, Tahiti, USA, Mexico, UK, Ecuador, Colombia and Argentina.

The teams began in Caapucú with a technical trekking stage and spent the first night around Lake Ypoá with another 20km ‘trekking’ stage, but this time including at least 5km of swimming! It was a unique mixture of SwimRun and orienteering.

The course after this was characterized by long stages as Nick Gracie from Columbia Vidaraid explained. “It was a fantastic course in a really beautiful area of Paraguay. There were only 7 stages and 6 transitions which gave it a real expedition feel.

“We had 3 shorter run/bike/run and swim stages to start with and then a long 100km bike to the start of the long trek stage. The trek was 94 km’s long with 3000m of climb and took in some amazing views and fantastic waterfalls, rivers and huge boulders and cliffs. There was then a 70km bike section to the final epic 130km paddle down 2 large beautiful rivers.”

He also spoke highly of the race organisation and support.  “As ever the organisation of the race was impeccable, from the moment you land to the time you fly off home again you are well looked after by the incredibly friendly and welcoming race staff.

“I’ve been fortunate enough to travel a fair amount of the world and I can easily say Paraguayans are by far the most friendly and fun people I have ever met. When you are out racing on the course everyone you meet says hello and makes you feel at home, it’s impossible not to fall in love with the place and its people.”

ARWS Race Referee Alan Pujol from Uruguay also emphasised this warm and professional welcome, “All of the teams were amazed by the kindness of Paraguayan people but also by the spirit of local racers, staff and international racers that made Expedicion Guarani what it is: an incredibly demanding adventure but also a great journey for adventure racers from all over the world.”

Fellow referee Greg Hollands added, “The location was out of this world. Lush green jungle, open grassy plains, huge rivers and glass smooth lakes. Gustavo Borgognon and Urtzi Iglesias have come up with an event that is amongst the best in the world. It’s a shame some of the other highly rated teams don’t come here and give it a go. They would be challenged and impressed.”

Race Director Urtzi Iglesias summed things up. “The route was demanding, with very challenging navigation. Only a few teams completed the full race, but all highlighted the beauty of the environment and the work done in updating the maps.We are very happy with the words of thanks we received from the racers. The great value of Paraguay is the kindness of its people and that is reflected in Expedition Guarani, where we try to make sure all the competitors live a unique experience.

We are already looking forward to starting work on next year’s route, in which there will surely be some great surprises.”

The AR World Series will be back in South America for a second time this year when Huairashinci takes place in Ecuador. Race dates are June 7th-13th.

Images are free for use with this press release only and only if credited to Wladimir Togumi | Digital Pictures.  Additional photography is available on request.

The AR World Championships is held annually at the completion of the AR World Series. In 2019 the series includes 9 expedition length adventure races in different countries from 4 continents. These last from 3 to 7 days and co-ed teams of 4 race non-stop to complete a course including trekking, paddling, mountain biking, navigation and other outdoor challenges. The World Championships will take place in Sri Lanka in December.