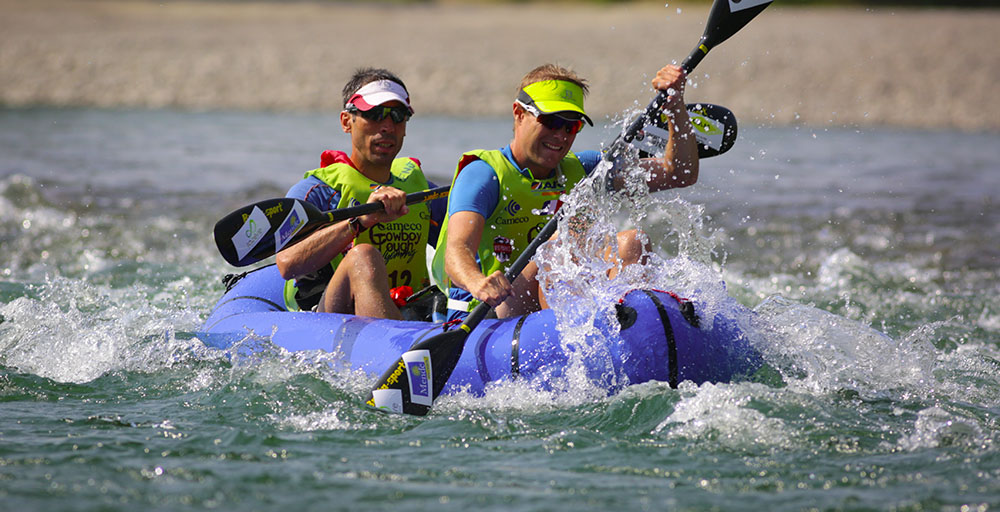 Day one of Cowboy Tough 2017 started early with teams meeting at race HQ at 05.30 to board buses to the start line in Jackson Hole.  It was raining and there was no breakfast at the race hotel that early in the day … so perhaps it wasn’t a surprise that it was about 06.00 before the 5 buses set off on the 6 hour drive.

On the journey teams got a look at the wide open spaces of Wyoming’s high country, and towards the end of the ride the scenery became gradually more mountainous, culminating in spectacular views of the Grand Teton range.  It wasn’t the clearest view as the weather was still hazy after the recent rains, but impressive none the less.

The race was to begin at the foot of the range, in Teton Village at the Jackson Hole ski resort, and by the time the buses pulled up everyone was glad to get off and keen to get racing!  Fortunately the sun had now broken through and everyone could stretch out on the grass, plus there was food from the resort restaurants.

There was business to be done too, questions for the Race Director now teams had seen the maps and the trackers and e-punches to collect.  Wyoming’s Governor Mead, who has been a driving force behind the project to bring Adventure Racing to the state made a brief speech and said, “When we first had the idea to stage an adventure race I had no idea it would lead to this World Championships.  It is truly impressive to see great athletes from so many countries here, and it’s the first World Championships of any kind on US soil in the past 16 years.”

Before the start Jesse Tubbs played the US national anthem on his trumpet (which was impressive as he has a broken finger and was playing with his ‘wrong’ hand).  Then teams gathered under the start arch, Governor Mead fired the starting gun, and the race had begun!

The first stage was a prologue run around the lower sections of the ski resort (at 6000’) which spread out the teams before they headed down a paved trail to the Moose Wilson boat launch area on the Snake River.

This was the first pack-rafting stage of the race and the transition was busy with teams pumping up their rafts and getting on the water.  Almost all had chosen to use two double pack rafts and they were soon moving quickly down the fast flowing river. The upper sections of the descent had some shallow rapids (Grade 1-2) and the racers had company on the water as many rafting and water sports companies operate on the river.

At the take out the teams all said it had been a fun and fast descent and Ruben Mandure called out to the Race Director, “Thanks for such a great river descent!”   Wouter Huitzing also told me he’d seen a couple of Bald Eagles on the paddle.

This transition was a little tricky as it was a steep haul up for 150m from the river bank to the road.  Once at the top the teams then had to leave their paddle bags and gear, before walking up the paved road into the main transition, where the gear bins were all line up waiting for them.

This lead to some confusion and I saw team members going back down the road barefoot to collect shoes, another to get the bear spray out of the paddle bag (though why it was in there is a mystery), and one Swedish team member went all the way back down the steep bank to fill up water bottles in the river.  As the route books warns of limited water access on the 38 mile overnight trek that could have been a good move.

Even the top teams seemed a bit muddled early in the race.  Jo Williams of Seagate had no extra clothes for the night trek (saying she’d been told to take them out!), Naturex were one of the teams going back down the road, and Tiki Tour, who were the first team to arrive, didn’t load their gear bins back on the truck before leaving.

This was something the referee on the spot noticed.  He was also checking kit for all the teams and there were strict instructions on not dropping litter at the roadside. Teams also had to zip tie their bins before reloading them, which is protection from bears being attracted to the food inside.  Though none were in sight the bears made their presence felt, with the zip ties, and with all teams having bear bells jangling as they set off and carrying their bear spray ready to hand.

Once through this transition teams set off on the first long trek of the race and into the first night.  The leaders were still very closely grouped at this early stage but we can expect the field to be more spread out by first light tomorrow.