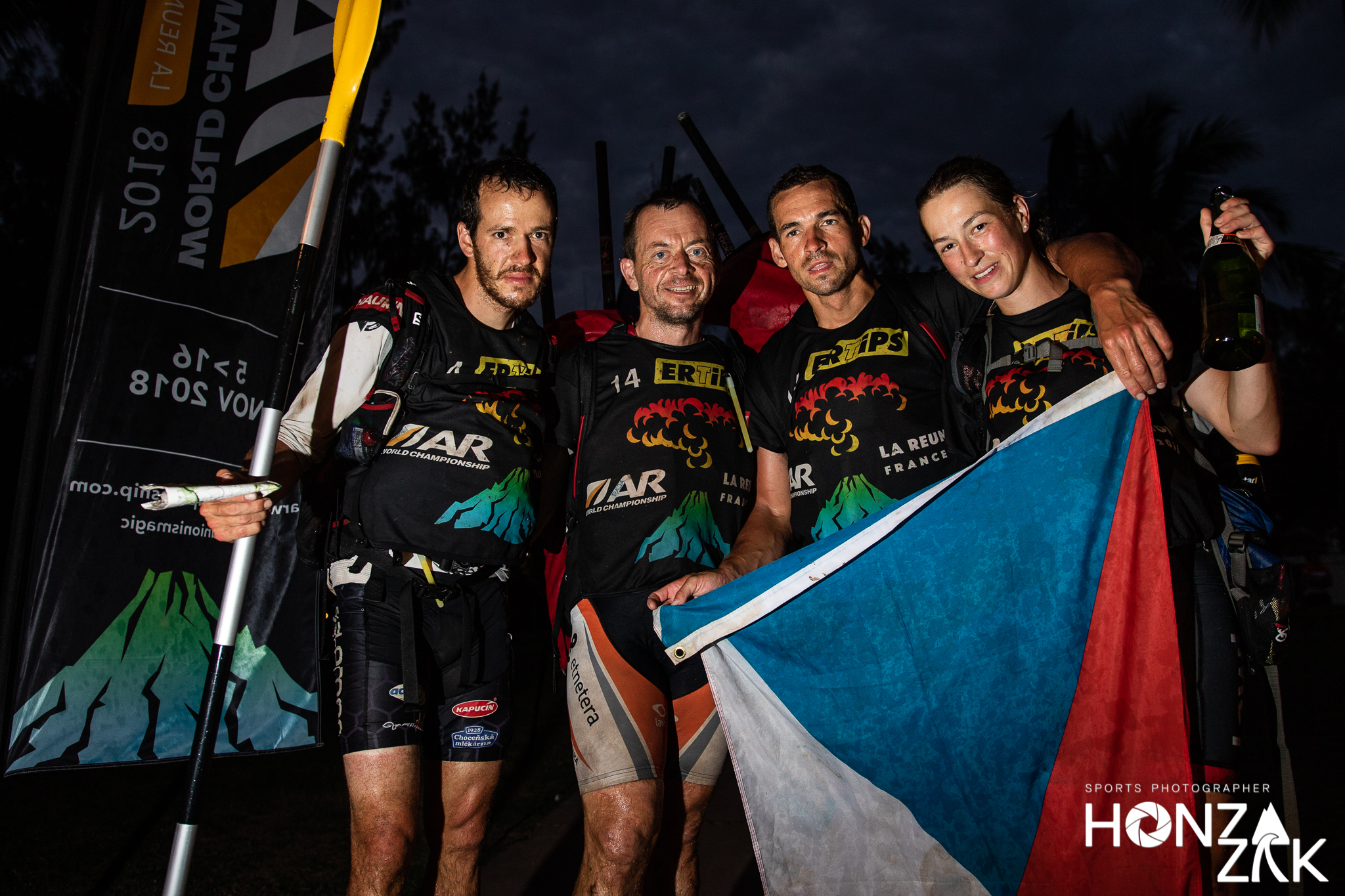 The 4th team to cross the finish line at this year’s AR World Champs was ‘Black Hill Salomon Opava Net’ from the Czech Republic, finishing in a time of 132 hours 45 minutes.  They ran across the line at Village de Corail just after dark, holding onto the 4th position they’ve held since the start of the volcano trek.

Since then they’ve been racing closely with the Estonian ACE Adventure team and last night the two teams were both stopped at CP17 for the dark zone on the paddling stage, so effectively it was a race to the finish line today. The Czech team used all their experience to keep up their pace and avoided any mistakes to hold the Estonian team at bay. They said on the finish line they’d got away at the start of the day and never seen them since.

Their reward was their highest ever position in a World Champs and it’s a result that’s been hard won by dedication and regular competition to gain lots of experience. They are a quiet team who get their heads down and get on with it, without making any dramas or headlines along the way. They tell me this is their 10th World Champs, and very few teams can say that. They’ve been top 10 before now, but this is by far their best result.

Jaroslav Krajnilk told me, “We were aiming for a top 10 as we’ve done that before, so this is a good result for us. We don’t have any big mountains to train in, or the chance to go sea kayaking, we have only flat water so it’s difficult for us to compete. Finance is also a problem and maybe this result will help us, and other Czech teams. There are lots more good Czech racers who would come if they had the money.”

They were followed across the line 45 minutes later by the Estonians who were carrying their inflated pack raft. They only had one as the other was irreparably damaged earlier in the race, so had to paddle with 4 aboard for the final stage tonight. Luckily it’s very short. They all got in the raft for a finish line shot before moving to the podium for their beer and pizza.

It’s here that teams are asked questions by the media, or given a microphone to speak, and when Silver Eensaar was given the chance to speak he took it, and another endurance epic began. In a slow, thorough and methodical way he went through an account of the team’s race from start to finish. How they made a mistake at the start, burst a pack raft, spent hours looking for a checkpoint, and even where they bought Panini’s along the way. On he went into the night and team mate Reeda Tuula-Fjodorov looked like she was going to fall asleep where she sat. He must have spoken without pause for 15 minutes and got a loud round of applause at the end when the thanked the organization for their perfect organization.

This team also have their training problems, especially for biking and trekking as they have no mountains, or even hills to speak of. Both teams have to put in a lot of hard preparation and regular racing to prepare for a World Champs attempt, and with top 5 positions all that hard work has paid off.