All Roads Lead to the Finish 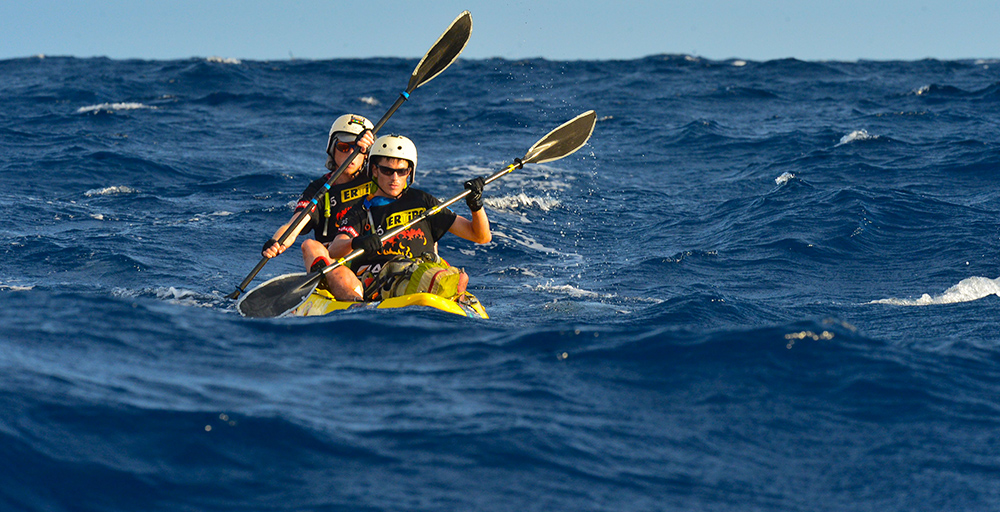 The last few days of bad weather on the Volcano have made the end of the race particularly hard for the teams at the back of the course.  All those I’ve spoken to have told me of the constant drenching rain and cold conditions, and the race has had to rescue a few teams and adapt the course so teams can finish.

Those teams at the very back of the race were bussed around to TA6 from TA4 (to miss out the volcano trek), which some will have been disappointed about, but had they gone ahead they would probably have regretted it and been unable to finish anyway.  The cut off on the bike descent from the volcano was brought forward as well and some teams moved down to TA6, and with conditions worsening at sea the kayak stage was shortened with teams moved forward from TA7 to CP17.

So that is where the back of the race restarted this morning, with the remaining teams paddling out to sea and along to TA8 at St. Leu.  Some were still on the full course, others on a shortened version and there were a few partial teams continuing and some made up of the combinations of teams. By this stage it’s a matter of getting to the finish the best way you can.

The teams paddled in St. Leu around a marker buoy to avoid the breakers and hauled their sit on top kayaks up the beach to the transition area, which soon became a manic muddle of bike and paddle gear populated by grizzled racers chewing food and in various states of undress.  It’s never pretty.

Christophe Aubonnet of the Intersport Lyon DSN74 team told me the familiar tale of discomfort on the volcano, but added with a smile, “that’s adventure racing, that’s what it’s all about’.  He confirmed his team are still on the full course, one of the 9 remaining teams still out on the course who want to cross the line as ranked finishers. (If they all make it there will be 30, just over half the race field.)

Two other full course teams are Uruguay Natural Ultra Sports and Olympus Red Ants of South Africa.  Reuben Mandure of the Uruguay team was not sure if they’d filled their sleep card or where still full course having been moved down from TA5 when the course was shortened. (They are.)  He was asking the staff about their status as the team tried to sort out a bike problem and they were talking of waiting until a bike shop in town opened before continuing.  This was a team I’d seen days ago at TA2 who at the time said they were taking it one step and one stage at a time. They still are and they are still moving forward.

Nicky Booyens of Olympus Red Ants came ashore in some distress, barely able to see at all. Her inflamed and sore eyes were squeezed tightly shut and a team mate applied drops before calling on the medics to help.  Shortly after wards she was rebuilding her bike, still in difficulty but with no thought of stopping for longer than necessary at the Transition Area.

The next task facing the teams was the daunting ride up what must seem like endless switchback roads and tracks to CP19, set at over 2000m on the rim of the Mafate Cirque, which they trekked through on the first day of the race. It is so unrelentingly steep almost all teams push the majority of it. We saw the Spanish Transdev team part way up the climb as they emerged from a ravine through a sugar cane field and they were labouring hard to pedal upwards. One shouted out that they were going as fast his 3 year old on her bike!

Soon after that we chatted to Thomas Barbereau of the Run Zourit team, who had pedalled ahead of his team and was lying down at the road side.  When I asked about the climb he told me, “I am not surprised as I’ve lived here for 12 years, so I knew what to expect.”  He added, “We have only short races here on the island, and none are overnight, so this is a different level and a new challenge to me. I am mostly an Xterra racer.” His team are doing well and are one of those still ranked.

All of the teams on the climb this morning will have a full day of uphill riding and pushing ahead of them and will descend in the hours of darkness back down to St. Giles le Baines for the final stage.

At the last transition they will leave their bikes and take pack rafts down the St. Giles Ravine, starting out by walking as it’s very narrow, then using the rafts where it broadens out to reach the coast, before the final run along the beach to the finish they’ve been striving to reach for so long now.