As the race moved into its 7th and final day, 64 teams had now crossed the line, 18 were still on the course (though not all ranked), and of the 64 finishers, 30 had completed the full course.

It has been a race with some surprises in the rankings, although the winners, The Swedish Armed Forces Adventure Team, were one of the most highly rated teams, so the fact they took the title is no surprise. They have racers with many years of experience and are well resourced, prepared and highly motivated. 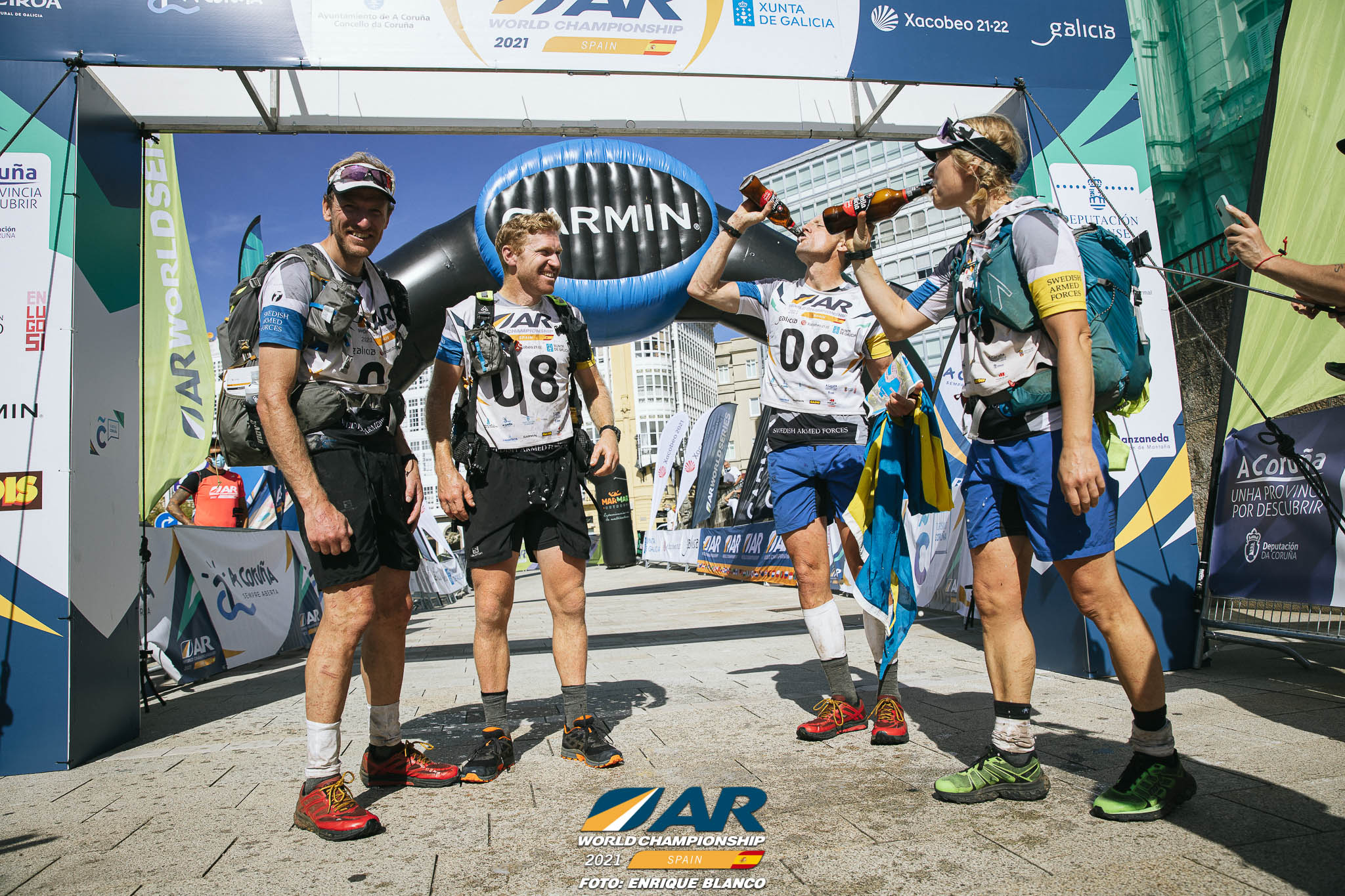 The Estonian ACE Adventure – La Sportiva team had their best ever ARWC finish, continuing their consistent improvement, and they too were among the favourites, but the Nordic Islands Adventure Race team in third place was something of a surprise, though perhaps not to the team. For a new team to take third, and with two relatively inexperienced racers, is rare at a World Champs, where the top ranked and experienced teams somehow always come out on top.  Until this year, that is.

For many years the Orbital AR team have been in the world’s top three ranked places, and they’ve been second 4 times at ARWC, but in this race they ended up the 3rd ranked Swedish team. The wheels came off on the final stage for them and they slipped to 8th place, much to their disappointment. It wasn’t the race the world #3 ranked team hoped for.

None of the top 3 teams in the rankings made the podium this time, with Torpedo Vidaraid (Spain) taking 4th and the world #1 400team Naturex of France withdrawing (although two of the team continued to the finish). Sixth ranked Team Blizzard (Russia), also pulled out and it is a measure of how hard this course has been that many of the world’s top teams didn’t make the finish line.

The Czech team, Black Hill, did finish, taking 5th place and that’s’ to be expected as they are one of the most consistent teams in ARWS races, usually finish in the top 10 and were 4th at the last ARWC on Reunion Island. 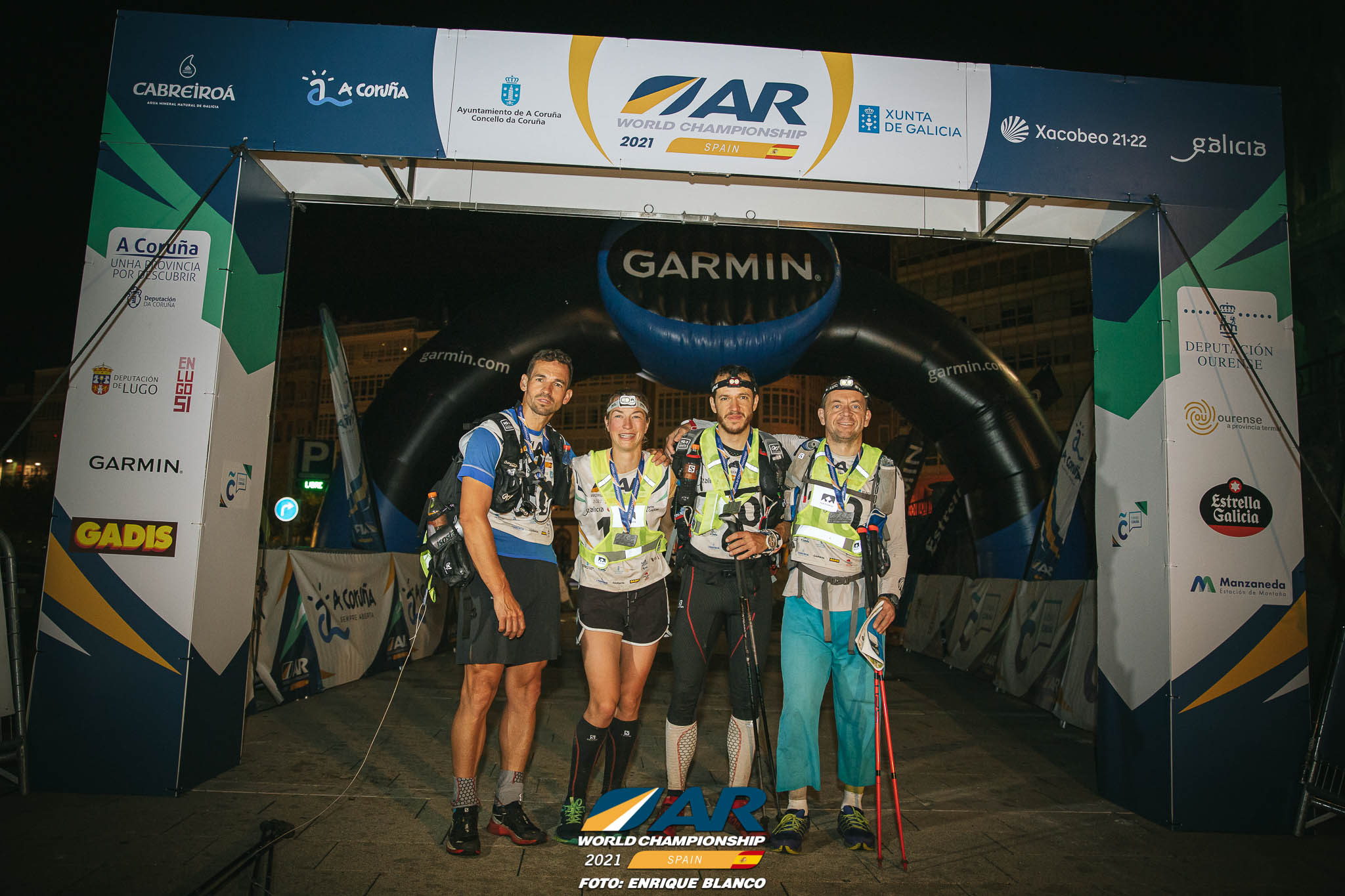 The 6th placed team will be a new name to many in international racing, the Zona 7 Cat team, who were the second Spanish team to finish (though they carried the Catalan flag over the line, after Vidaraid had finished carrying the Basque flag.)  This team had two established racers with European Champs wins behind them in Andris Ansabergs (Latvian and living in Spain) and David Tarres, who organisers some races himself in Catalonia. They were joined by Ana Martinez Romero a couple of months before the race, who had not done a big expedition race before, and at the very last minute by Tauno Riiback from Estonia.  He showed tremendous faith in a team he didn’t know to fly out to join them.

The Endurance team made it 3 in the top 10 for Spain, finishing 9th and the top French team were FMR in 7th place. This team was notable as they raced with two women and two men, and they were the only French team in the top 25.  Given France has the biggest racer federation and probably more races than any other country, it wasn’t a great championships for one of the powerhouse countries of Adventure Racing. 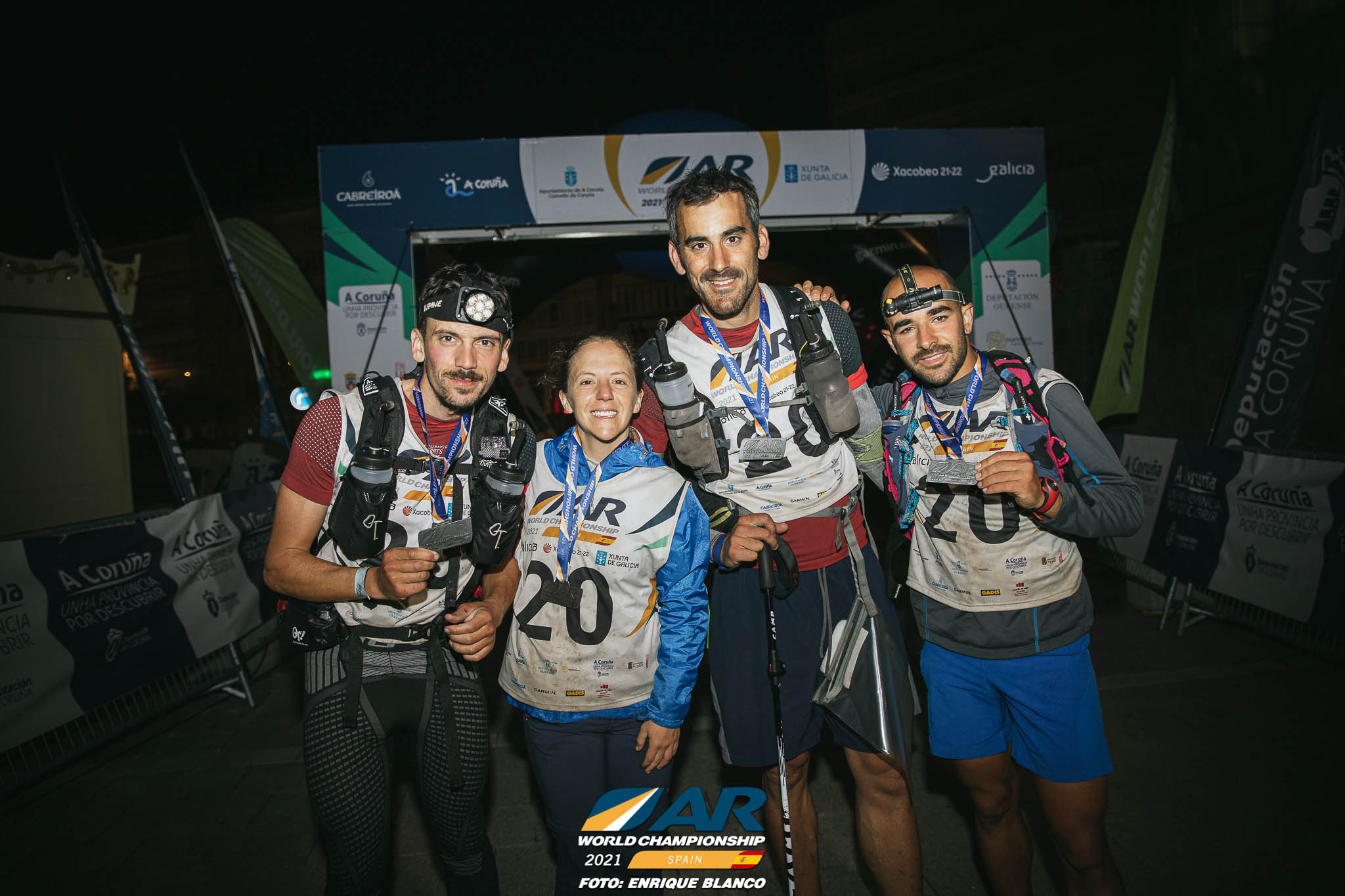 The Red Fox team from Russia rounded out the all European top 10 and they don’t have a lot of ARWS experience, but the Red Fox Race in Russia is a big event with the backing of large club and organisation.

BOA Brazil Multisport were the top South American finishers in 11th place and they had a remarkable race, starting slowly with two team members feeling ill, then powering back through the field in the final few days.  The Finnish team, Mareld Adventure, were 12th ahead of the defending Raid Gallaecia champions, Nordisk from Denmark.  There were 11 different countries represented in the top 20 and this included 5 Spanish teams, 4 Swedish teams, 2 Estonian teams and 2 British teams.  There were also another 2 Swedish teams in the top 30, so they were by far the most successful nation at the race.  The top US team were Bend Racing who finished in 24th place. 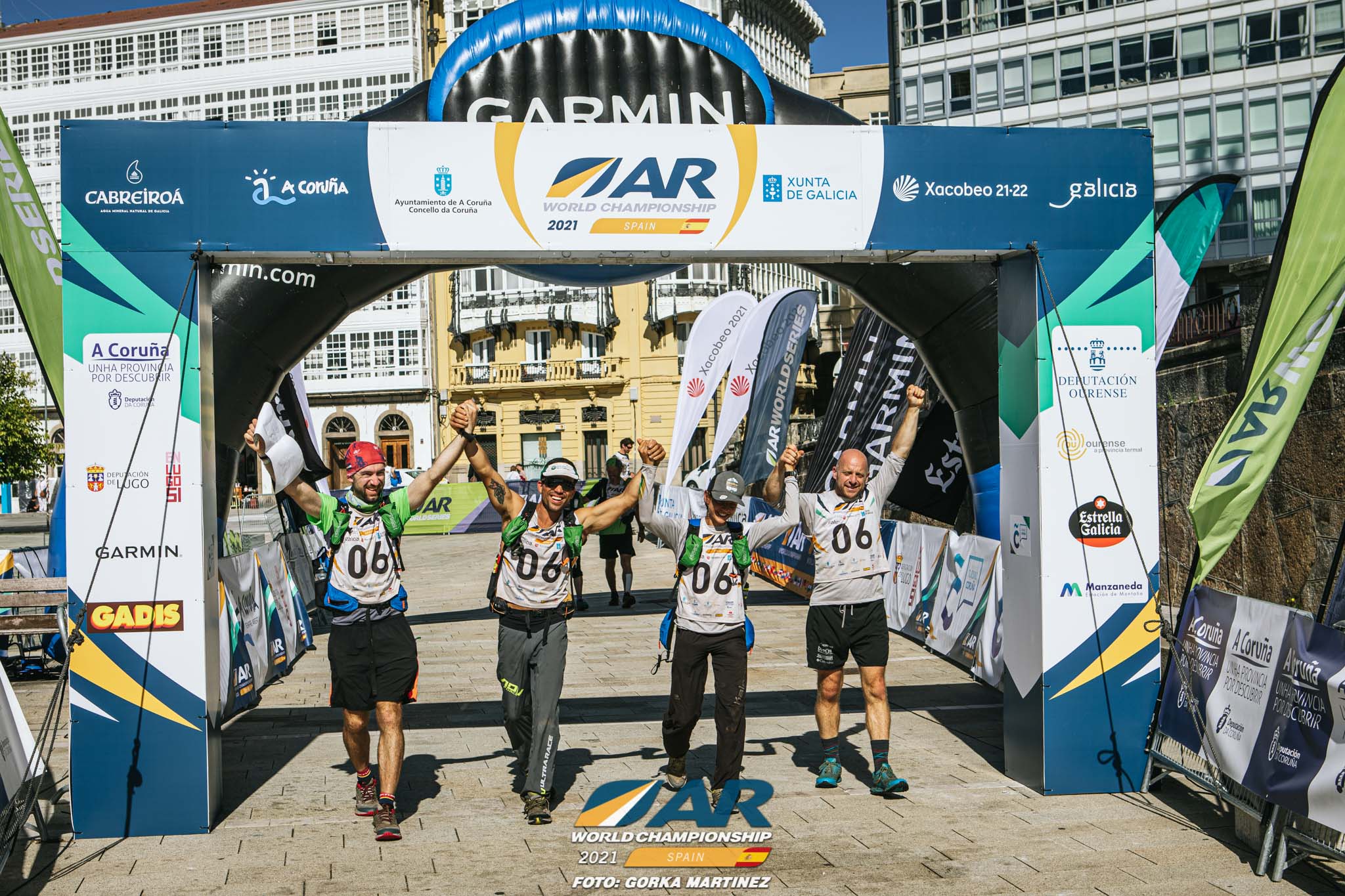 It’s notable too that all the former World Champions racing finished the race in the top 20.  (Nick Gracie on BOA Brazil Multisport, Nic MacLeod on Gymcity AR, Arnau Julia on Track the Race, and Tom Gibbs on UK Adventurers.)  Perhaps it shows the value of experience on such a long and physically demanding course.

Teams continued to finish during the final day of the race, and those on the course have one more hard night ahead and until noon tomorrow to get to the finish line in A Coruna. They are all on the last trekking stage as the final 7 teams were taken off the water and driven forward for safety reasons.  The last to leave the final transition were team #24, Pena Guara-Sherpa. 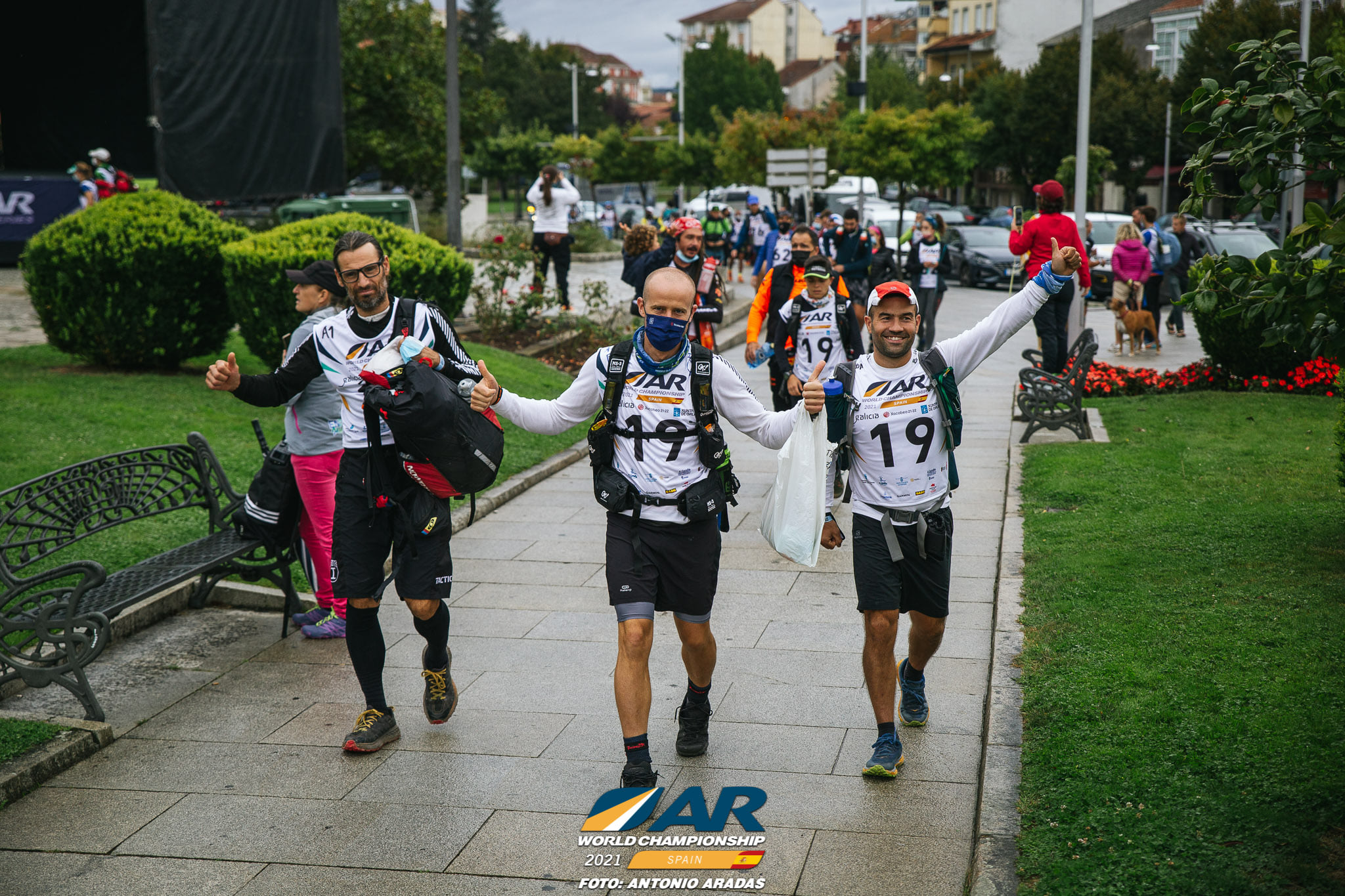